Brands Hatch’s Grand Prix anniversary to be celebrated this May

The 50th anniversary of the first Formula 1 World Championship Grand Prix to be held at Brands Hatch will be marked at this year’s Masters Historic Festival on 24-25 May.

The 50th anniversary of the first Formula 1 World Championship Grand Prix to be held at Brands Hatch will be marked at this year’s Masters Historic Festival on 24-25 May.

The 1964 Grand Prix was won by Briton Jim Clark, his Lotus 25 finishing just 2.8 seconds ahead of Graham Hill’s BRM P261. Brands Hatch went on to host the British round of the World Championship a further eleven times, alternating with Silverstone until 1986. The 1983 and 1985 European Grands Prix were also held at the venue, and the fourteen events saw victories from F1 legends Jack Brabham, Jochen Rindt, Emerson Fittipaldi, Niki Lauda and Nigel Mansell.

The festival will be headlined by the superb FIA Masters Historic Formula One Championship, for F1 machinery from 1966 through to 1985. McLarens, Williams, Tyrrells and many more examples from a golden era of the sport will be racing hard on the classic Brands Hatch circuit once again. The Historic Grand Prix Cars Association will also be staging a race for cars from the 1930s to early 1960s, up to the time the Kent circuit first appeared on the World Championship calendar. 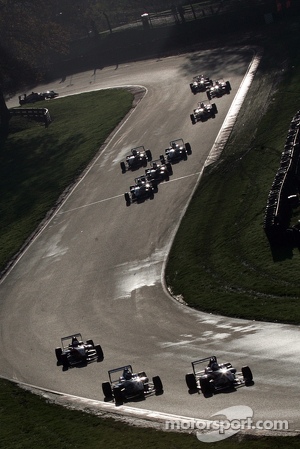 Masters Historic Racing will be organising a display of as many Brands Hatch Grand Prix-winning cars as possible to mark the 50th anniversary. Plus there will be demonstration runs from classic F1 machinery spanning all eras of the sport.

This year’s Festival will take place on the Saturday and Sunday of the Bank Holiday Weekend, with the full Grand Prix circuit in use, just as it was during the halcyon days of the sport. There will also be further historic racing action on the Bank Holiday Monday, this time making use of the Indy layout.

There will also be a host of races for classic saloons and sportscars, including the FIA Masters Historic Sports Car Championship. Off-track, there will be car club displays, trade stalls and entertainment making a fun day for all the family. More details on content of this and the race programme will be announced in the coming weeks.

Masters Historic Racing Event Manager Rachel Bailey said: “We are very excited about our Brands Hatch Masters Festival for 2014. By moving the main days to Saturday and Sunday we are targeting a greater number of European racers and thanks to the inclusion of the HGPCA we will be looking at the evolution of Grand Prix cars from the 1930s to the mid-1980s. It should be a great weekend.”

Tickets for the Masters Historic Festival at Brands Hatch on 24-26 May are available in advance from £18, with free entry for children aged 12 and under. For more information call 0843 453 9000 or visit www.brandshatch.co.uk