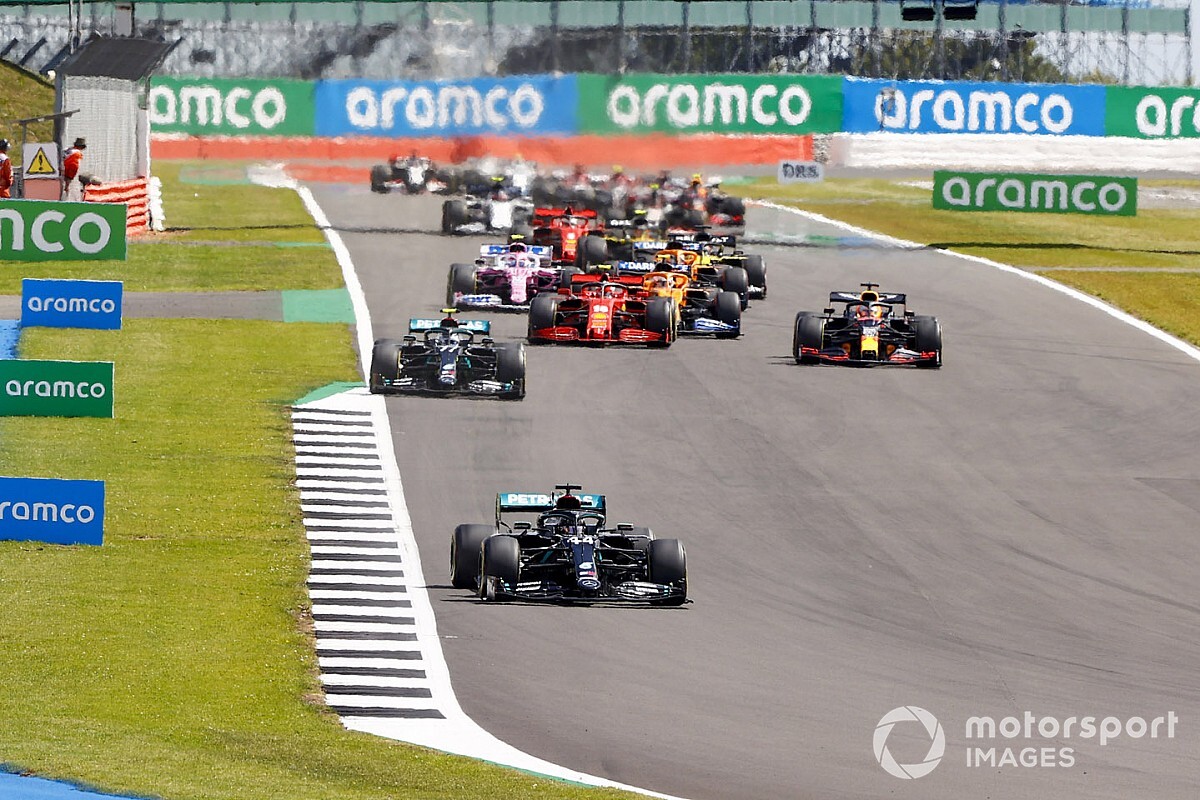 Lewis Hamilton won the British Grand Prix for Mercedes, despite a last-lap tyre failure at Silverstone.

Hamilton was leading comfortably, when his left-front tyre delaminated on the very final lap and he had to drag his car around on three wheels to beat Red Bull’s Max Verstappen.

There was drama before the start when Nico Hulkenberg, subbing for the Covid-positive Sergio Perez at Racing Point, suffered a technical problem and couldn’t start the race when the power unit refused to start up.

Hamilton held off his faster-starting teammate Valtteri Bottas into the first corner, as Red Bull’s Max Verstappen and Ferrari’s Charles Leclerc duelled over third behind them. Verstappen made a move stick into Brooklands to claim the place.

A safety car was required at the end of the opening lap, as Red Bull’s Alex Albon punted the Haas of Kevin Magnussen into a spin at the final corner, and the latter's car hit the tyrewall and its left-front corner was torn off. Albon was given a 5s time penalty for causing the collision.

Hamilton led Bottas and Verstappen but the safety car was out again on Lap 13 when Daniil Kvyat suffered a huge crash at Maggots, saying he clipped a kerb. He stepped unscathed from his wrecked car.

The Mercedes cars were forced to double stack in the pits, but Verstappen wasn’t close enough to jump Bottas. The order remained: Hamilton, Bottas, Verstappen and Leclerc. Romain Grosjean was the only car not to stop, and was elevated to fifth, ahead of Carlos Sainz (McLaren) and Daniel Ricciardo (Renault), the latter being passed by the second McLaren of Lando Norris at Luffield at the Lap 19 restart.

Sainz had to battle his way past an obstinate Grosjean, who received a black-and-white flag for swerving towards him at Stowe. Grosjean then did a similar move on Ricciardo, before finally pitting and dropping back to the tail of the field.

At the front, Hamilton pulled well clear of Bottas – although both Mercedes drivers complained of blistered tyres. Verstappen could have taken a ‘free’ pitstop but decided to keep the pressure on the Mercedes – albeit 10s behind.

Bottas’s pace fell off sharply towards the end, and his left-front tyre blew with three laps to go, promoting Verstappen to second. Bottas fell to 12th.

Hamilton’s left-front then blew on the final lap, but he just held on to win from Verstappen, who pitted for fresh tyres in response to Bottas' troubles. Had he stayed out, he would have won.