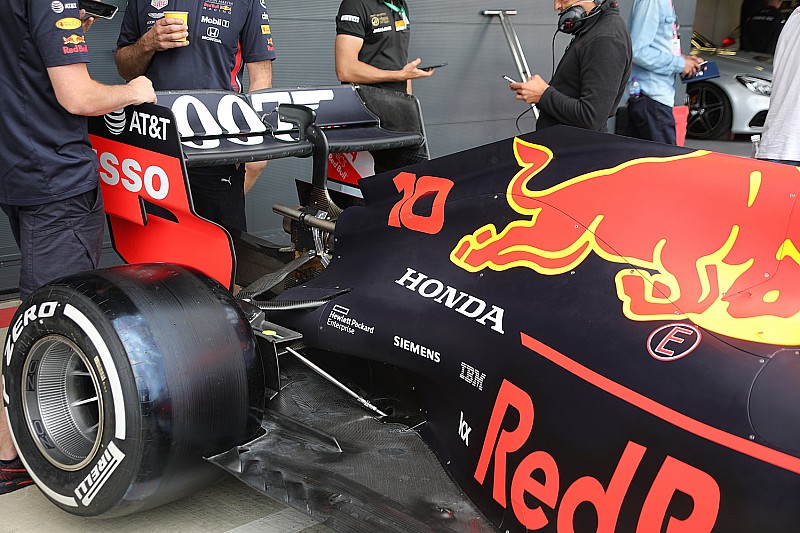 Giorgio Piola and Sutton Images bring you the Formula 1 technical updates on show in the Silverstone pitlane at the British Grand Prix, giving insight into the relentless development undertaken by the teams in pursuit of more performance. 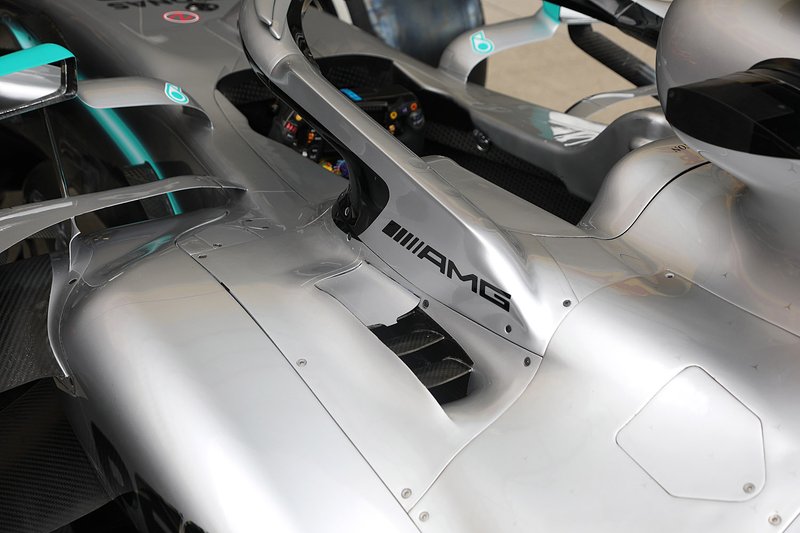 After problems in Austria, Mercedes has initially set the W10 up with a less intrusive cooling package for Silverstone, with the same louvred panel alongside the cockpit but without the outlet on the transition of the halo into the bodywork. 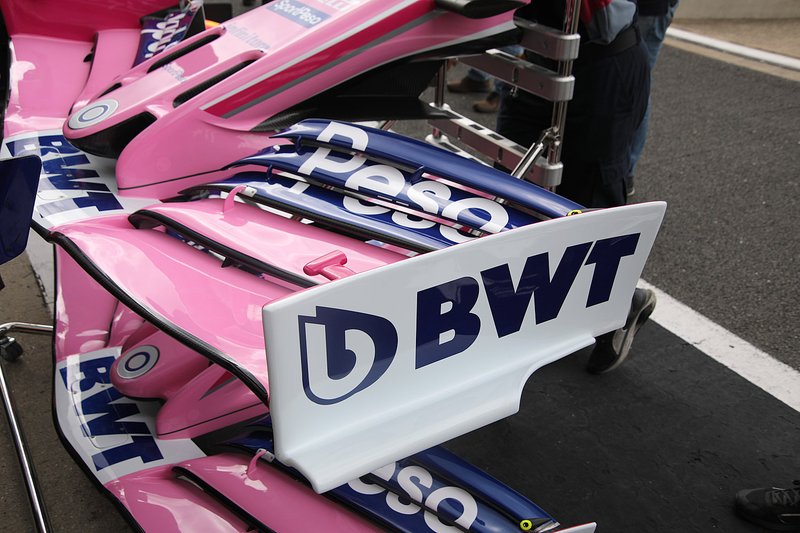 A close-up view of Racing Point’s new front wing, which features a new, shorter footplate design that looks to alter the ferocity, shape and trajectory of the vortex that’s created by it. 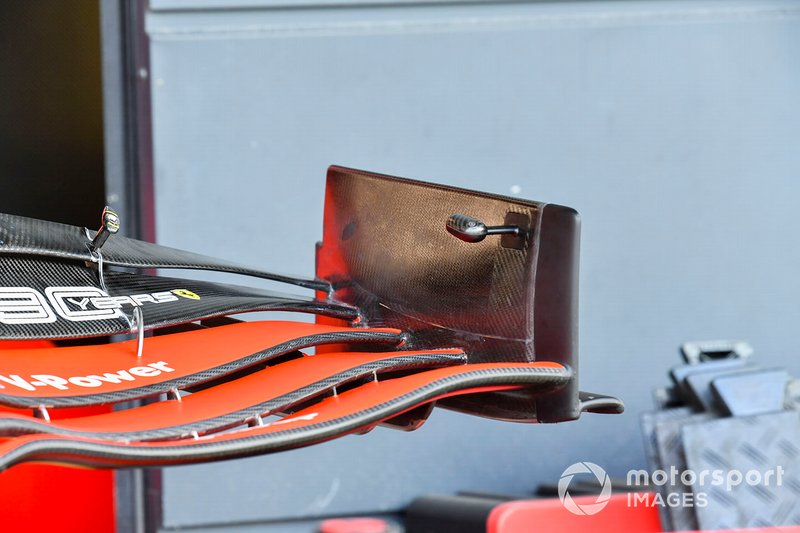 An interior shot of Ferrari’s front wing, which shows not only the rear cutout on the endplate but it’s also interesting to note that where the flaps meet with the endplate has been altered too. 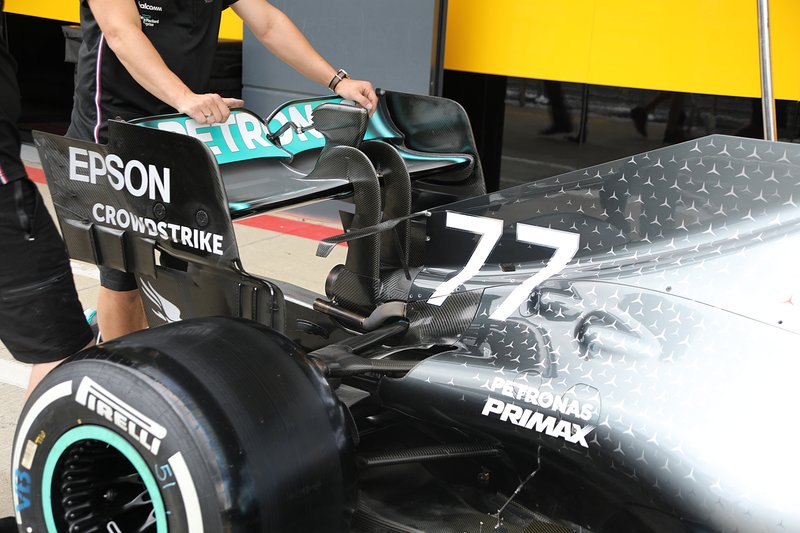 This overview of the Mercedes W10’s rear end shows how tight the bodywork is, so much so that blisters on the engine cover are used to envelope the internal components. 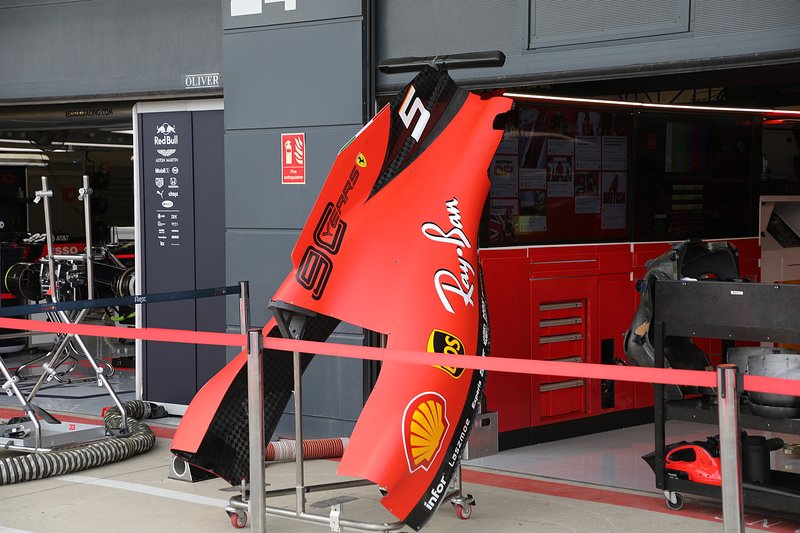 A small change but a significant one in terms of packaging and weight is the introduction of a revised engine cover for Ferrari. Previously the cooling outlet at the rear of the bodywork comprised several panels but has been replaced by a cover that incorporates this section of bodywork. 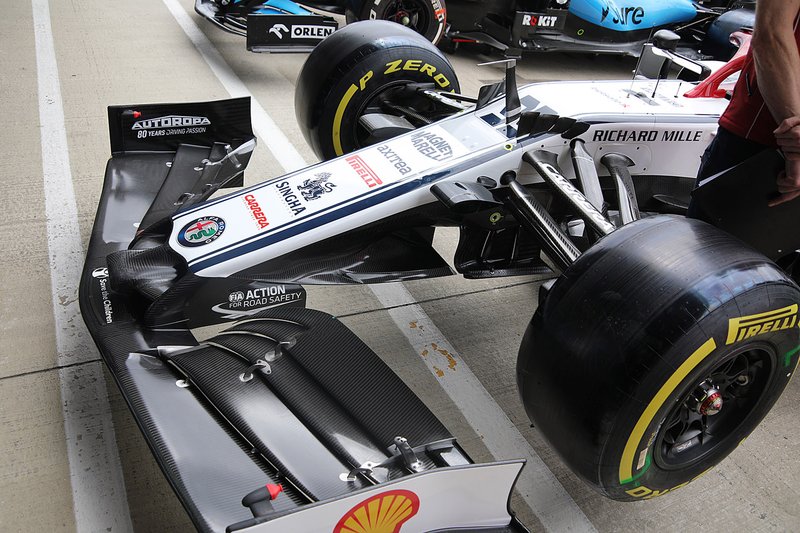 Alfa Romeo is the latest team to deploy a ‘cape’ solution on its nose, which collects and repositions the airflow that passes by the structure, in order to improve performance downstream. Slightly out of shot the team also has a new front wing, which sees the mainplane’s leading edge lifted in the outboard section, with a subsequent alteration to the flaps that succeed it. 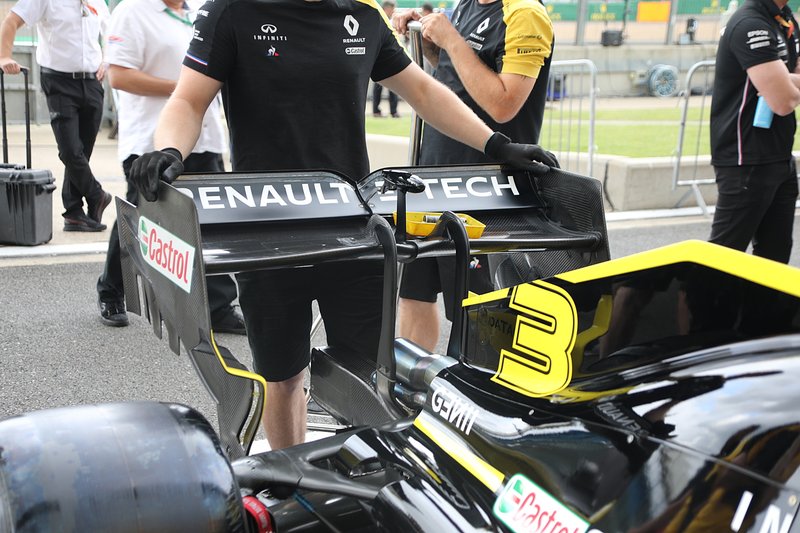 This shot of Renault’s rear wing shows us how the team is using a design that looks to trade some downforce for drag reduction, with a smaller wing box section and an upturned leading edge on the mainplane just a couple of the tools at its disposal. 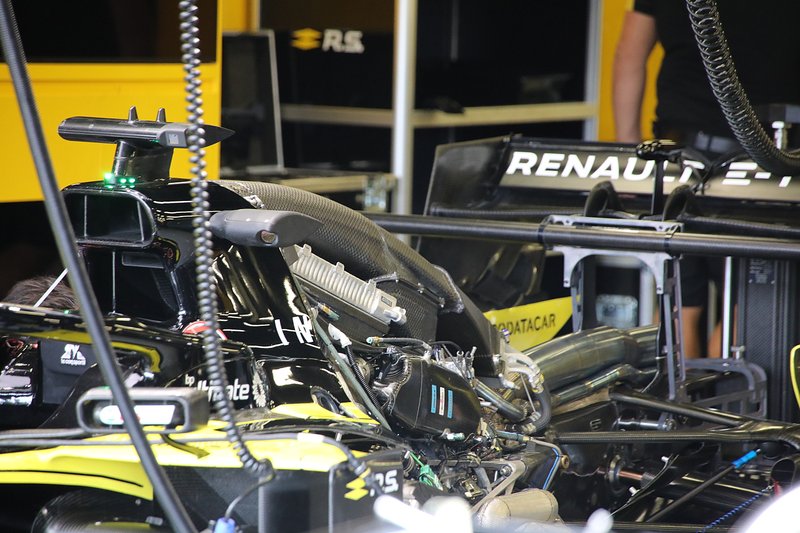 This image affords us a fantastic view of the Renault RS19’s power unit and some of the layout of some of the ancillary components. 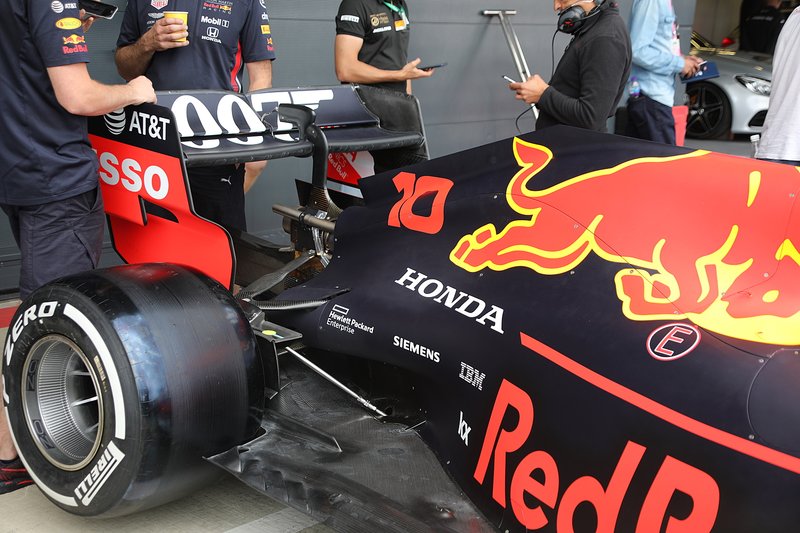 Red Bull’s RB15 not only carries the 007 logo for the British GP but also retains the recently introduced exhaust and engine cover package. The wastegate pipework, that was previously mounted just above the upper suspension leg, has been placed higher up in-line with the cooling outlet being increased in size to accommodate changes made by Honda. 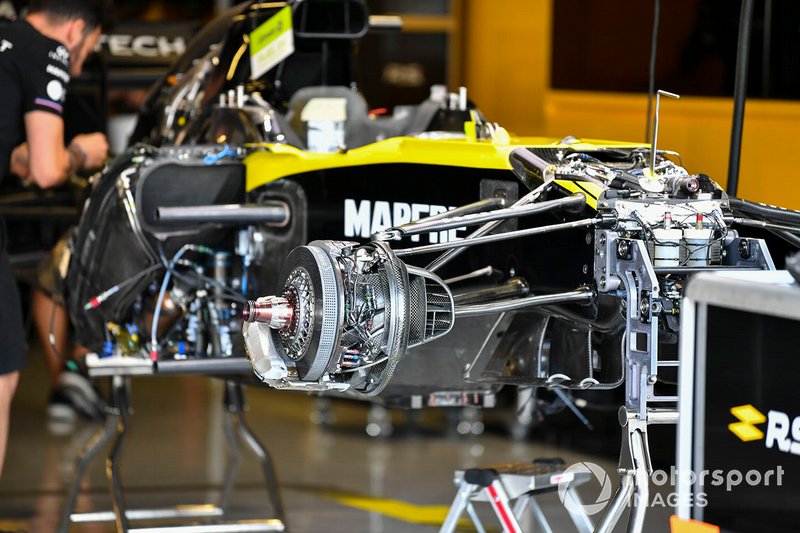 A look into the Renault garage as the RS19 is being prepared affords a view of various aspects of the car that would otherwise be covered up. In the foreground we can see the internal workings of the front brakes, as the drum ordinarily placed over them to improve braking and cooling efficiency is not yet in place. The side-impact support spars, which largely dictate the shape of the sidepods, are clear to see behind, while the inboard suspension elements can also be viewed at the front of the chassis. 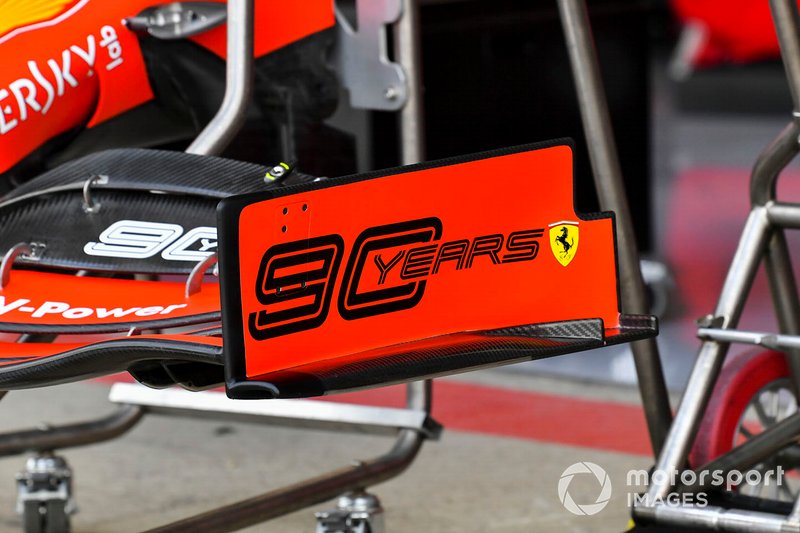 Another look at the changes made to Ferrari’s front wing just a few races ago, which features a cutout in the rear section of the endplate, a revised footplate and a triangular vane mounted atop it to divert airflow outboard. 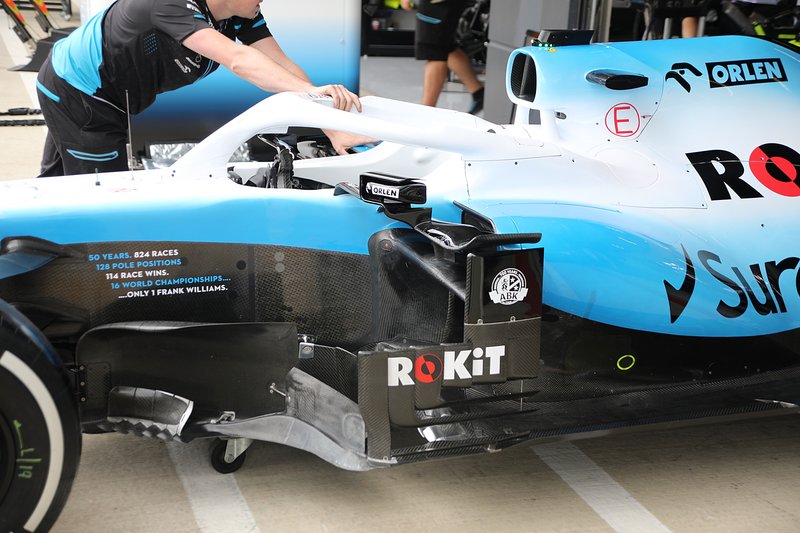 Williams has made changes to the FW42 for the British GP as the team alters the aerodynamic paraphernalia that surrounds the sidepod. The vane that usually crosses over the top of the sidepod, and blends with the tall vertical part of the deflector, now stops short and features an inverted arched profile. This is a design trait consistent with one we’ve already seen deployed by Red Bull in recent years that creates a specific aerodynamic airflow structure that assists in the performance of the sidepods. 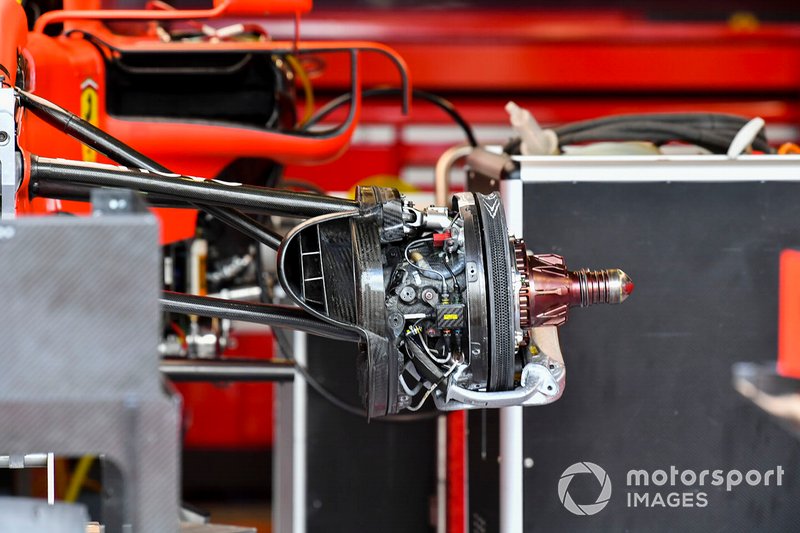 A close up of Ferrari’s front brake assembly which has recently undergone some changes in order to improve braking efficiency for the given circuit. 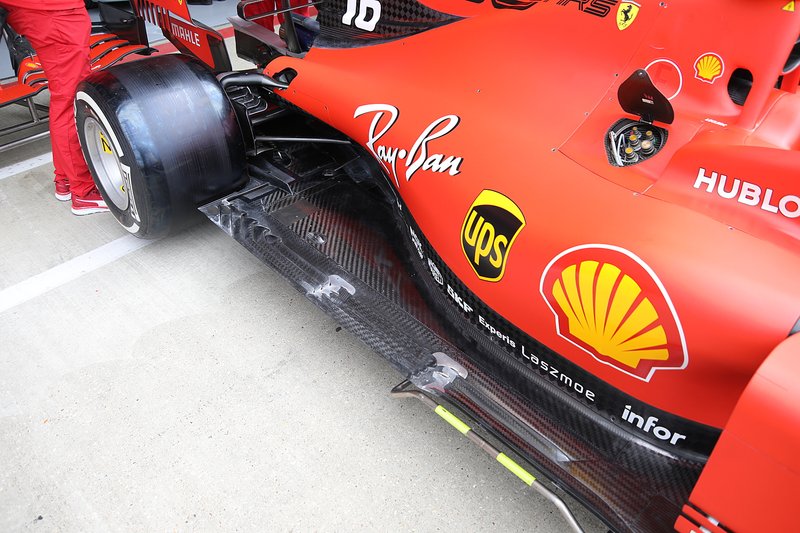 A close-up view of Ferrari’s floor, whichhas metal inserts embedded into it in areas of weakness. Flexibility here would make for airflow inconsistencies that would be damaging to performance.