Jenson Button made a final farewell visit to Brawn's Brackley headquarters this week, prompting "sadness and anger", according to the Daily Telegraph. Jenson Button was all smiles on earlier celebration day with the Brawn GP staff prior to ...

Jenson Button made a final farewell visit to Brawn's Brackley headquarters this week, prompting "sadness and anger", according to the Daily Telegraph. 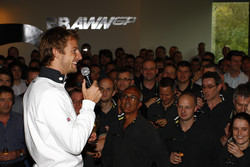 Jenson Button was all smiles on earlier celebration day with the Brawn GP staff prior to his signing with the McLaren F1 team.
Photo by Brawn GP Formula One Team.

In the wake of his switch to McLaren, the speed of the new world champion's relationship breakdown with his 2009 team is demonstrated by the fact that Button's 'My Championship Year' book features a foreword by Ross Brawn in which the driver's "loyalty" is praised.

But while in London to promote the book, Button said he now just hopes to remain friends with Brawn, 55.

"I am actually earning less than I would have been at Brawn so it's not about the money. It's because it's something new," said the Briton, whose retainer is about half the size of his countryman teammate's.

He explained to Reuters Television that after winning the championship, "I thought 'so, what happens now? Where do I go from here?'.

"I've been very comfortable within that (Brawn) team and it (moving to McLaren) is taking me outside of my comfort zone. That's why I am doing it.