Can McLaren keep cutting the gap to Mercedes in 2021? 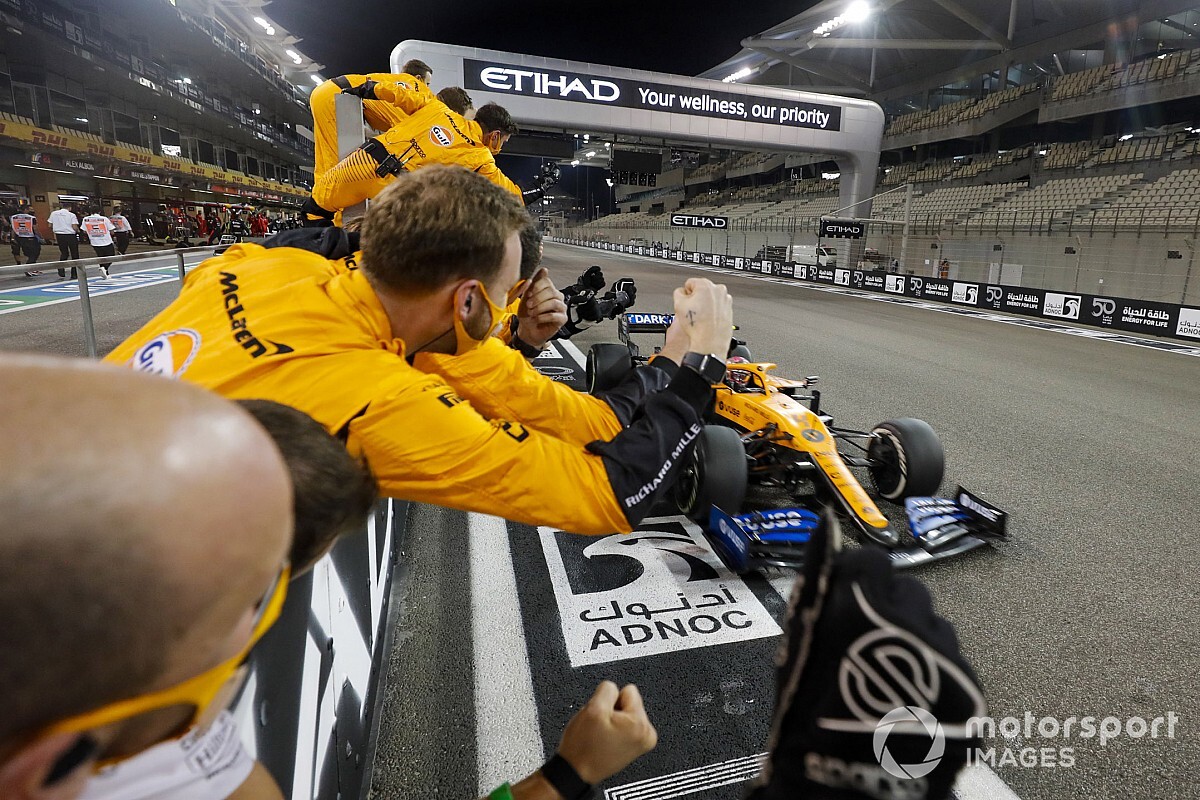 The Formula 1 season finale in Abu Dhabi may have been a dead-rubber in the title fight, but the battle for third in the constructors’ remained a major storyline.

McLaren was able to clinch third after overturning a 10-point deficit to Racing Point in the final race as Lando Norris and Carlos Sainz finished fifth and sixth respectively, marking the team’s best season since 2012.

But one of the most eye-catching parts of McLaren’s Abu Dhabi weekend was its qualifying performance, especially that of Norris.

Armed with a fresh Renault power unit, Norris was able to qualify fourth at the Yas Marina Circuit, but was just 0.251 seconds off pole position - a tiny margin by normal standards. It was a result that gained world champion Lewis Hamilton’s attention.

“I’m really happy to see a McLaren so close,” Hamilton said of his former team. “They’ve got changes, and they’re using our engine next year. It’s great to see that they’re ending the year with a good car.

“Perhaps they can be in the fight with us next year. If it makes it a three-way team championship, that would be amazing for the fans to see.”

The fall of Ferrari broke apart F1’s long-standing ‘big three’ of the V6 hybrid era in 2020 and spiced up the fight to top the midfield. Although McLaren failed to win a race, unlike Racing Point and AlphaTauri, it was the biggest beneficiary of the order shake-up.

But for McLaren Racing CEO Zak Brown, his team’s success was not simply a case of removing Ferrari from the equation. He reckoned the gap to Mercedes had already shrunk through 2020.

“Our [pre-season] expectations were to continue to close the gap to the front,” Brown said.

“It’s still a huge gap, but we actually have closed the gap statistically. We obviously look at our race pace and our qualifying pace, and we have closed the big gap to be less big.

“From a pure competition, reliability, and performance standpoint, we’ve definitely taken a step forward. So overall, I’m very pleased with the progress, but clearly still a long way to go.”

The swing between Abu Dhabi qualifying in 2019 and 2020 is huge. For last year’s season finale, Norris finished 1.6 seconds off Hamilton’s pole position time. This time around, he was just 0.165s behind the Mercedes driver.

Naturally, the picture is clouded by Norris’s fresh power unit for the season finale, when the Mercedes cars were running in a conservative mode after a long season.

Crunching the numbers, the average gap between the lead McLaren and the lead Mercedes has indeed shrunk through 2020 - but not by a huge amount.

From 21 races in 2019, Mclaren was outqualified by an average of 1.28 seconds by the leading Mercedes. This year, that gap falls to 1.14 seconds.

It’s a fall, but not the kind of seismic change that Hamilton was overly optimistic about - nor is it something that McLaren itself was getting too carried away by.

“It’s obviously nice for all of us at McLaren that Lewis, who started his career with McLaren and won his first title with McLaren, is respecting and watching the progress we’re making as a team,” said team principal Andreas Seidl.

“But we have a clear picture and a realistic picture of where we are as a team. We know that it will take time until we have everything in place we need to challenge for the top positions again in Formula 1.

“So long as we have not completed the process, there is a reality. We have a very talented team, a very motivated team, and we simply need to keep our heads down and keep working.”

One of the major changes to boost McLaren for 2021 is the arrival of Mercedes’ power units, rekindling the famed works partnership of the late-90s and 2000s.

It is anticipated the move away from Renault will offer McLaren an important performance boost, even if the customer deal comes without the bells and whistles its former works status previously did.

“There’s a lot of people on both sides that were together when they were winning races and championships, and there’s a lot of familiarity with each other.

“From everything I’ve been told, you can see how well prepared Mercedes are to service their customers with their communications, their timelines, their well-oiled machine.

“All the feedback I’m getting from the technical team is how excited they are, and how smooth the collaboration is going. Everything I’m hearing is very positive.”

It may not quite be enough for McLaren to join the fray and fight for race wins alongside Mercedes and Red Bull as Hamilton may wish, but the numbers are certainly moving in the right direction.