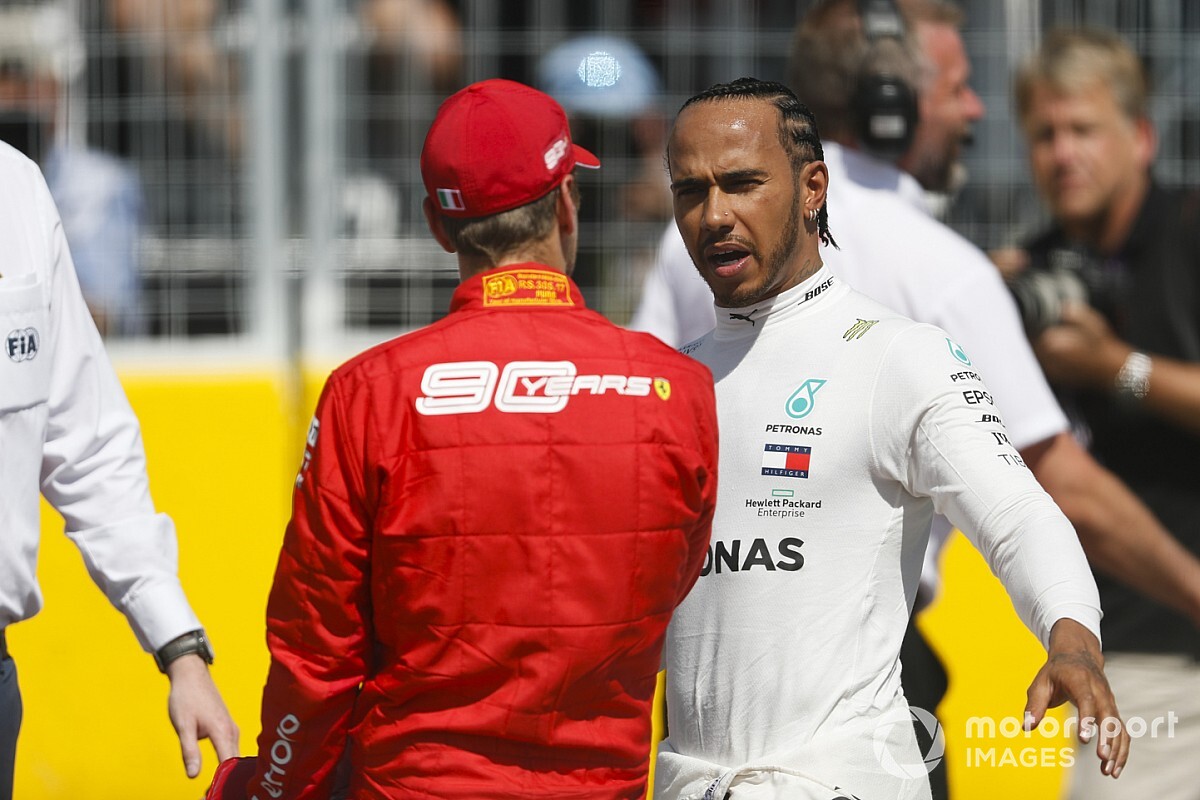 Sebastian Vettel took his first pole position of season - and his first since the 2018 German Grand Prix - but will he have it all his own way in the race?

Will the Mercedes winning streak end?

This is the big question on everybody's mind. With the Ferrari drivers starting first and third, they're clearly in the prime position and at one of their most competitive venues so far this season. In terms of having a car specifically for the race, Mercedes have talked up their long-run pace, but Ferrari seem to be quick where it matters, and have been strong in sector three all weekend, which could fend off any attacks into the main overtaking zone at the final chicane.

Canada has thrown up oddball races in the past, so Ferrari might be hoping for a straightforward Grand Prix where all they need to think about are trying to keep Mercedes at arms length. But if Mercedes do challenge Ferrari on the race track, memories of the Bahrain Grand Prix will be fresh in the memory, where Vettel lost out in an on-track duel with Hamilton. Can Vettel hold his nerve?

How much progress can Verstappen make?

The Red Bull man - who had been trying to progress on the medium tyres - was unfortunate to be caught out in Q2 by the late red flags. Kevin Magnussen's big crash denied several drivers the opportunity to make improvements and Verstappen ended that particular session in eleventh place, just short of progressing into Q3.

He has since been boosted by demotions for two drivers, McLaren's Carlos Sainz (three-place grid drop for impeding) and Haas' Kevin Magnussen (pit lane start due to crash damage), and will start the race in ninth place, and still with a free choice of tyres.

The prospect of a free tyre choice might have been even more exciting if the Ferraris and Mercedes were forced to start on the softest tyres, but it will still be fascinating to see what tyres Red Bull give him for the race start.

Can Ricciardo spring a surprise?

The Renault driver profited from below-par qualifying sessions for both Pierre Gasly and Valtteri Bottas to qualify in a remarkable fourth place, giving Renault their best individual qualifying result since the 2010 Japanese Grand Prix, when Robert Kubica qualified in fourth.

Most of the time a midfielder mixing it with the established top six is swiftly disposed of in the race, but tyre debate is an interesting one. Ricciardo starts on the soft tyres, so will they provide enough traction on the opening lap for him to - at least temporarily - race against the medium-shod top three drivers?

If not, it will be interesting to see how much of a fight he, or team-mate Nico Hulkenberg for that matter, can put up against the Red Bulls.

Will the soft tyres hold on?

Just how much of a disadvantage will it be to start the race on the soft tyres? Drivers were saying that they didn't believe they would last very long in the race, and Pirelli believe that the fastest race strategy is to avoid the soft tyre altogether which, in theory, disadvantages the midfielders in the top ten who start on the red-walled softs.

Despite concerns, drivers had been able to eke out two or three fast laps on the soft tyre during FP3 and qualifying, which is surely not the sign of a tyre that would be unusable after 5 or 6 laps.

If the soft tyres can't hold on, look out for the midfielders just outside the top ten who could benefit with the harder tyres. The likes of Max Verstappen, Daniil Kvyat, Antonio Giovinazzi and Alexander Albon were the ones to miss out on Q3.

Do you think Ferrari can convert pole position into their first win of the season? What will you be looking out for in the race? Leave your thoughts in the comments section below.