Formula 1 has a reputation for being one of the least forgiving sports in the world.

When on-track battles and off-track negotiations warrant bravery to thrive in such a cut-throat environment, the more human side of the paddock can often be ignored.

But, naturally, it never goes away. Each one of the 1,500-plus paddock personnel has their own story, their own challenges, and their own battles they face daily.

Grief is something we all must manage at one stage of our lives. In the case of Mercedes technical director James Allison, it came in shocking and devastating fashion when his wife, Rebecca, died suddenly from bacterial meningitis at the age of 47 in March 2016.

Allison was working as Ferrari's technical chief at the time of Rebecca's death, but left the team that July in order to spend more time in the UK with his three children and wider family.

Shortly before the start of the 2017 season, Allison made his return to F1 with Mercedes as its new technical director following Paddy Lowe's exit to Williams. Entering an environment that had already produced three consecutive title doubles meant he anticipated a certain level of intimidation.

"It was a team that had already dominated the sport for three years running," Allison explained in a video on Mercedes' YouTube channel.

"It was a team full of engineers of the highest calibre. It was a very settled team with professionals in every level of the team who absolutely knew their job. Arguably they just didn't need me, they would have gone on to great things without my arrival at all.

"I was conscious as I walked through the door for the first time that I was walking into a team that I hope I could play a part in, but that that team would definitely be blisteringly strong whether or not I showed up. That knowledge is already a sobering one."

Allison was conscious of this pressure to perform, but remained "something of a wreck" upon arrival at Mercedes just months after the death of his wife.

"I'm still grieving today, four years on, but then I was crying in the car on my way into work and crying on the way home," Allison said.

Allison could have taken a longer break from F1. But the timing of his return to work helped give some direction and purpose that he had been struggling to find.

"I didn't know what the right thing to do was at the time. Most of me was just wanting to crawl into a hole and never come out again," Allison said.

"But Toto [Wolff] gave me this opportunity, and I hoped as time passed that I would start to feel like I would want to re-engage with the world.

"By the time I was walking in the factory gates at Brackley, I was feeling a little stronger and a little more useful, and was able to get a sense that despite the pain of losing Becca there was still some use in me.

"As the weeks rolled by, turned into months and eventually years, that gamble that Toto took on me, I hoped I repaid by being useful."

Three years later, Allison has been part of a further three double title-winning campaigns, playing a significant role in the design of the 2018 and '19 championship cars.

Besides the on-track success, he has also become a significant leader and figure within the team. It is hard to imagine the current Mercedes squad without his presence.

Mercedes is a team that places a big focus on the well-being of its employees, especially their mental health. The importance of a strong team spirit and corporate culture cannot be understated when explaining Mercedes' success.

"It's about putting everything together and not leaving one stone unturned, having a no-blame culture, empowering people, even when it's difficult, when you would rather control things," team principal Wolff explained last year.

"I think the strengths go very deep, values that are ingrained in the team. You need to live it in the difficult moments, and that has made the strengths of the team."

These are values that helped bring some of Allison's spark back - something for which he is deeply grateful to Mercedes.

"In a part of my life where everything was turned completely on its head, and where nothing felt normal, the most familiar part of it was my work," Allison said.

"There, the rhythm of the racing reason, the pressure to get a car out, the pressure to develop it, the thrill of winning, the challenges the season throws your way - all those things felt familiar, and they were about the only part of my life that did.

"I was very, very fortunate to be granted a place in a team that is extraordinarily one-hearted, and with a group of people who didn't need me, but nevertheless opened their arms to me, and made me feel welcome, provided a space for me to work.

"[The team] created an environment for me where I could be useful, and where I could grieve and recover, while having the most enviable and brilliant job in the whole pit lane.

"It's a team that I feel particularly close to for having provided that for me." 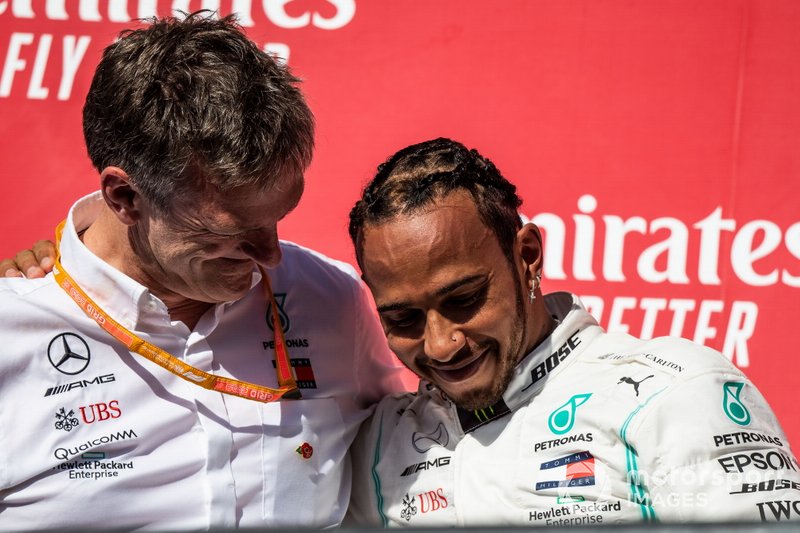 Hamilton stands out with his "utterly unblemished" F1 record

Ocon says "no place for DNFs" in shortened 2020 F1 season