CHAMPCAR/CART: Rahal had fun in Vegas with BMW Sauber

Graham Rahal has definitely over the years proven that he simply loves to race even to the point of missing a lot of his high school activities including his Senior Prom! The son of Bobby Rahal, seems to be able to hop into any racing machine and ...

Graham Rahal has definitely over the years proven that he simply loves to race even to the point of missing a lot of his high school activities including his Senior Prom! The son of Bobby Rahal, seems to be able to hop into any racing machine and drive the "wheels off of it"! 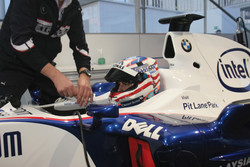 Graham Rahal in the BMW Formula One car.
Photo by BMW PressClub.

Of course in this case and not on a proper racing circuit, the teenager had to take it a bit easy in handling the BMW Sauber Formula One car in Las Vegas, Nevada. Having just finished his rookie season in the Champ Car World Series, Rahal was invited to attend the Pit Lane Park event with the opportunity to take exhibition runs in the F1 team's car just days before BMW Sauber F1 will unveil their 2008 F1 racer in Munich, Germany.

"It was a real thrill for me to experience the Formula 1 car even though it wasn't on a proper racing circuit," Rahal said. "BMW and F1 have always held a special allure for me and it was an honor for me to have had my first experience in an F1 car in a BMW Sauber machine."

Rahal's career has covered open-wheel to sportscar and the young racer appears to be able to easily slide into any race car and be comfortable with the drive. The former Sports Car Club of America (SCCA) amateur Formula Atlantic class National champion in 2005 went from karting to SCCA racing to Pro racing in a short amount of time.

BMW of North America, no doubt, had a hand in his being requested to have fun in the F1 car, Rahal helped to get the Formula BMW Series known to the racing fans and younger upcoming drivers.

Having a well-known name in racing circles might have been a factor but Graham has proven that he has his own style of racing and his own talent. He is truly a racer and many would like to see him become the American who makes it to F1 and excels to the top of the charts and standings. The choice will be his without a doubt.

The Formula BMW Series' made their debut in North America in 2004 and one of their drivers was Rahal. The champions that year was Germany's Andreas Wirth. Second was Canadian James Hinchcliffe, Rahal was seventh with 11 top-10 placements in the 14 event schedule with a third place in Denver. What was more remarkable was the fact he started the season at the age of 15 (with special compensation).

His career continued to climb up the ladder to Champ Car via the Star Mazda Championship series where he made history at the age of 16 by being the youngest driver to win a race in the series; the same feat he performed at his home track Mid-Ohio taking the aforementioned SCCA national title. In 1975, his dad Bobby earned his SCCA National Championship in the same class. 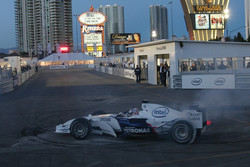 The golden boy moved to the Atlantic Championship series the next year and even with five wins (the most by any driver in 2006); including his history making victory in Monterrey, Mexico as the youngest race winner in the history of the series, Rahal ended the year as the sub-champion in the highly-contested series.

While awaiting his first year in Champ Car with the Newman/Haas/Lanigan Racing team, Rahal kept busy racing for Team Lebanon (his paternal heritage) in the A1 Grand Prix World Cup of Motorsport Winter series and racing sportscar endurance events; including for his dad's team in the American Le Mans Series.

When one talks about his rookie season in the Champ Car ranks, one needs to take into account that on January 4th last year, Rahal turned 18. He had an up and down season as did the more seasoned veteran drivers in the series with the debut of the new Panoz DP01 chassis.

It truly was not a surprise when Rahal's teammate, Sebastien Bourdais, ended the 2007 season with his fourth consecutive championship. Now Bourdais has moved on to F1, leaving Rahal, at this time, as the sole team driver for the new season. It is expected that NHLR will announce their second driver.

In his rookie Champ Car season, Rahal finished fifth in the overall and second to Robert Doornbos (Minardi Team USA) in the Rookie of the Year. Once again, he made history. This time he became the youngest driver to stand on the podium when he landed second in Houston, Texas.

Next up for Rahal will be in Daytona, Florida for the 2008 Rolex 24 and from there he heads to Sebring for the first pre-season open test for the Champ Car teams in early February.

The star is bright for the young racer and only time will tell where he ends up racing in 2009. For many of his fans, their hope is he ends up in Formula One!

Toyota unveils their TF108 in Cologne