It is the second year in a row that the Renault RS27 V8 engine has made a clean sweep of the Bahrain podium, and the first time since that race that an engine manufacturer has monopolized the top three. The result is the 154th win for a Renault engine in F1 and the 36th for the Red Bull Racing Renault partnership. 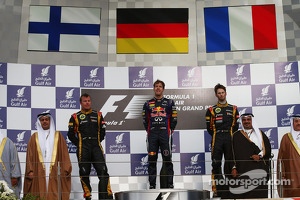 Rounding off a positive day for the French manufacturer, Mark Webber put the sister Infiniti Red Bull Racing into the top ten. The Australian looked set for fifth position until the final lap of the race, however high tyre wear at the close allowed Lewis Hamilton and Sergio Perez to squeeze past. The double points finish for Infiniti Red Bull Racing and Lotus F1 Team puts the two out in front in the constructors’ championship with 109 and 93 points respectively, while Sebastian Vettel and Kimi Raikkonen sit first and second in the drivers’ race with 77 and 67 points apiece.

Although Williams F1 Team finished just out of the points with Pastor Maldonado 11th overall, the team fought strongly with the midfield. Valtteri Bottas passed the flag in 14th, losing some time with some small issues in the pit stops.

The Renault-engined Caterham F1 Team enjoyed its strongest outing of the season so far, with the new upgrades clearly paying dividends. Charles Pic raced to 17th, keeping pace with a Sauber and Toro Rosso ahead. Giedo van der Garde had a more turbulent race, with an extra pit stop required for a front wing change as a result of a collision with Jean-Eric Vergne. The Dutchman finished in 21st.


A great result for all at Renault Sport F1, with a clean sweep of the podium for the second consecutive year in Bahrain. It’s also the first time in a year that an engine manufacturer has done this so we can be really proud of the result. Coming at a tough track like Bahrain, where the heat, lack of humidity and general ambient conditions put lots of pressure on the engine internals, it’s an even more satisfying result.

While Sebastian’s win and the two Lotuses on the podium is the highlight of the day for us, there are a number of other positive areas. The performance of the two Williams was stronger and Pastor was not too far away from scoring the first points of the season. Equally the Caterhams have made a big step forward here and now seem to be back in front of the Marussias.

Having this depth of performance across all our partners is obviously what we want to do – and having two fighting for the championship is really an ideal way to be in the championship. We’ve got a number of areas to focus on now in the break before the start of the European season, not least with the teams bringing new upgrade packages, so we’ll celebrate this one and then get back to the hard work to try and repeat it in Spain!

Podium finish for both Lotus F1 drivers at Bahrain

FIA would have investigated Bottas F1 pitlane spin without complaint