The 2012 Formula 1 World Championship drew to a close today at Interlagos’ circuit with one of the most thrilling races of the year that also saw both Pedro de la Rosa and Narain Karthikeyan get across the finish line, for the ninth time this season in 17th and 18th positions respectively. 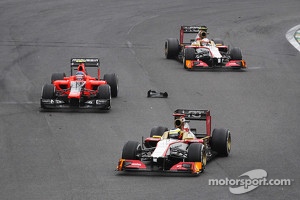 Rain finally made an appearance minutes before the race start and that was only the beginning of a crazy race that saw rain coming and going, loads of pit stops, all sorts of tyres and safety cars over the 71 laps.

It has also been one of the best races of the HRT Formula 1 Team and their drivers, who managed to put in an extraordinary performance despite the difficult track conditions.

Today’s race has put an end to a tough and challenging but also rewarding season for the young Spanish outfit that wants to congratulate Sebastian Vettel on his third World Championship title.

HRT Formula 1 Team also wants to thank our sponsors, partners and fans alike for their continuous support all year long.

Pedro de la Rosa: "It’s been a great race and I enjoyed driving very much. You never knew what to expect as conditions were changing every lap. You had to keep focused as it was easy to make mistakes and we pulled it out quite well.

It’s certainly been one of the most enjoyable races of my career. We have done a good job overall and I am quite happy with the outcome. We wanted to finish on a good note and I think we did. I also want to congratulate Vettel on his third title.

And finally thank the team for their tireless work and commitment and also our sponsors and fans that have supported and pushed us from the beginning to the end of this amazing season.”

Narain Karthikeyan: "It has certainly been one of the most difficult races of the season given the changing weather and track conditions. But I am very satisfied with how we all dealt with it and the way we drove.

It was a bit of a gamble as weather conditions kept on changing during the whole race and it was easy to loose tyre temperature or overuse them when the track was drying out.

But we managed the situation well and got both cars across the finish line, which is a positive way to finish the season. I want to thank the whole team for the work they’ve done all year and I am very proud to be part of this team”.

Luis Pérez-Sala, Team Principal: "What an amazing and difficult race! The changing conditions made it quite challenging out there and both drivers stayed fully focused from the beginning to the end and put in a fantastic performance.

The work that all mechanics and engineers did in the garage was also very good and both cars got to the checkered flag, which is the best way to finish this long, tough but rewarding season.

I am really proud of every single team member, without whom this season wouldn’t have been possible. But also thank our sponsors, partners and fans alike for their continuous support”.

Infiniti to become title partner of Red Bull Racing from 2013