Sergio Perez: “Overall, it’s been a weekend of improvement for the team, so I’m really looking forward to tomorrow.”

Sergio Perez ( 9th - 1m41.068s): “The car felt great today. If we’d found a couple of extra hundredths, we might even have been seventh – it was achievable. 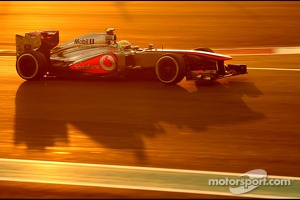 “It was important to stay calm after a disappointing FP3. I think we’ve made the right steps forward for the race, particularly as we knew how much the track would change from the afternoon into the evening – we reacted well.

“Overall, it’s been a weekend of improvement for the team, so I’m really looking forward to tomorrow.”

Jenson Button (Q2 13th overall - 1m41.200s): “Today’s Q3 was a puzzling session. I think we struggled to get the tyres working because of the cooler temperatures – I had to take so much rear wing off to try to help balance the car, but it wasn’t enough. We were maxed-out on the front wing, too.

There wasn’t anything else I could have done with the car to help the front end, since we were already running very low downforce on the rear – as could be seen by our straightline speeds.

“It’s quite frustrating, because in FP3 this afternoon we looked really promising – sixth-quickest – and the car felt very good.”

Martin Whitmarsh, Team principal, Vodafone McLaren Mercedes: “After our reasonably promising performances in FP1, FP2 and FP3, today’s qualifying session was clearly rather disappointing for us. Moreover, even in Q2 this evening, Checo had shown pace and promise, posting the fifth-fastest lap-time, so it was a pity that a yellow flag compromised his ability to deliver on that promise and pace in Q3.

As for Jenson, he’s looked very good throughout the weekend so far, posting the sixth-fastest lap-time in FP3 this morning, but sadly this evening he was unable to find the same balance and as a result he failed to go through to Q3.

Tomorrow, though, as we’ve seen them do many times before, both Jenson and Checo will surely race hard and well, and will be aiming to score as many points as possible in an effort to consolidate our position in the constructors’ world championship.”