Domenicali: “We have a clear aim, to win”

Before Christmas, Team Principal Stefano Domenicali announced a reorganisation of various areas within the Scuderia. Today he spoke to the media on the future as well as the present.

Madonna di Campiglio, 16 January –2013 will hold plenty of challenges for Scuderia Ferrari and will be an important year in terms of tackling the significant changes to the Formula 1 regulations that will come into effect in 2014. A transition year therefore? Absolutely not. Before Christmas, Team Principal Stefano Domenicali announced a reorganisation of various areas within the Scuderia, which had begun halfway through 2011, with the aim of ensuring the best possible balance between the design and development of the 2013 and 2014 cars. This involved two separate working groups to operate as effectively as possible on both the immediate and longer term future.

The new approach has naturally attracted interest from the media, who attended today’s traditional press conference with which Domenicali officially got this new Ferrari season underway.

“The 2013 season will be a complex one from many points of view,” said Domenicali. “We face a few changes on the technical front which will have a significant impact on all areas of the company, not just in terms of design, but also when it comes to the investment and infrastructure required to develop the new engine. Within the limits imposed by the regulations, we need to put every effort into reaching our objectives, while making the best use of the timescale in preparing for 2014. 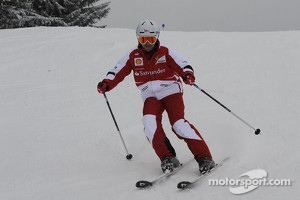 "Our aim is clear, to win and the priority is still that of giving our drivers a car that will be competitive right from the very start. The development of the 2013 car began in the Cologne wind tunnel and is on-going. I certainly expect to see greater efficiency than last year because we will no longer need to carry out comparisons of data and correlation with the Maranello wind tunnel, which is currently being rebuilt and is due to be operational again after the summer break."