F1 driver market moves "a bit of a shock" for Norris 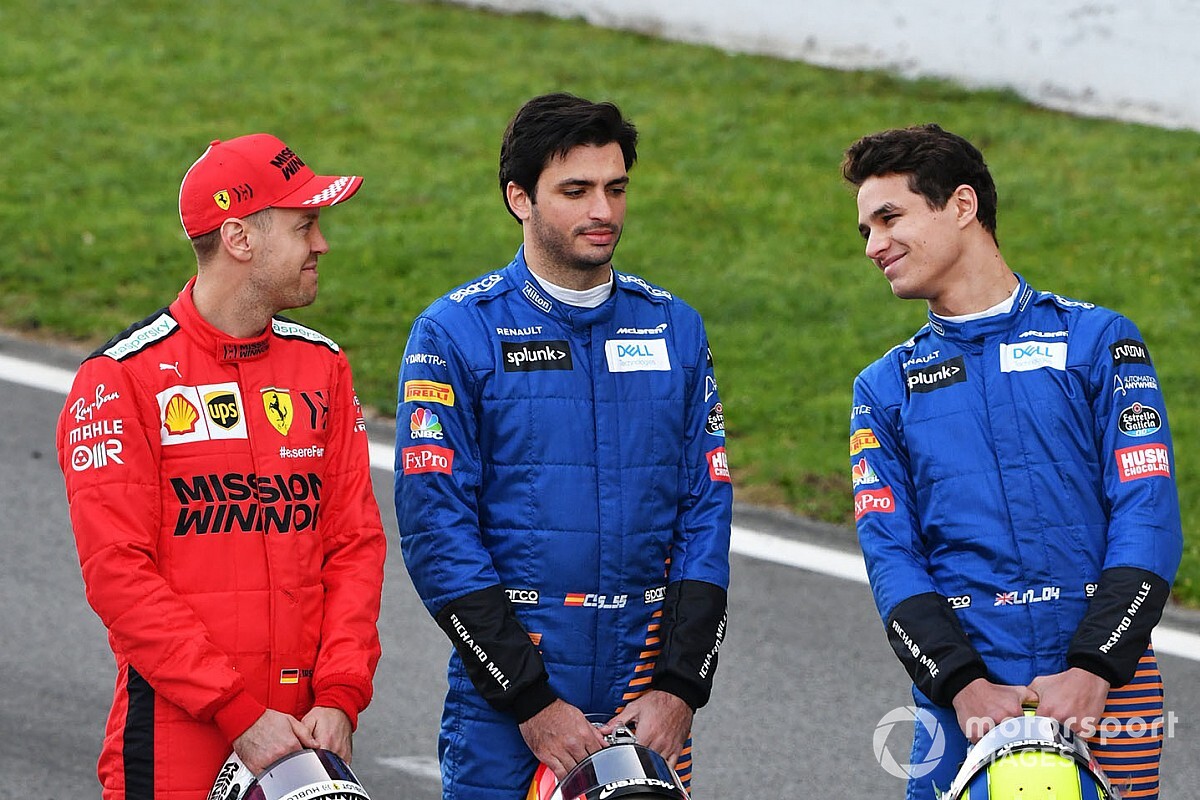 Lando Norris says the recent moves in the Formula 1 driver market came as "a bit of a shock", but was not surprised McLaren signed Daniel Ricciardo for 2021.

The first driver changes for next year were confirmed last month after Ferrari announced Sebastian Vettel's exit from the team at the end of the current season.

Ferrari swiftly confirmed the signing of Norris' current teammate, Carlos Sainz, as Vettel's replacement, while McLaren snapped up Renault driver Ricciardo to join the team for 2021.

Norris said that while he did not expect Vettel to leave Ferrari and Sainz get picked up as his replacement, the arrival of Ricciardo at McLaren came as little surprise given the team's previous interest.

"It wasn't so much of a surprise of Daniel coming to McLaren, but I think the bigger surprise was Carlos leaving McLaren for Ferrari and Vettel leaving Ferrari," Norris told Motorsport.com.

"I guess it was a bit of a shock, especially because no one really expected Seb to do what he did and not to sign with Ferrari again.

"I think as soon as Seb didn't sign, then you knew something was going to happen. Everyone seemed quite firmly in place with their teams because no one was really expecting it.

"I guess something of a surprise was going to happen, and obviously Carlos went for it and got the seat. Fair play to him, I'm happy for him.

"But I don't think the Ricciardo thing was as much of a surprise, because obviously I knew that McLaren wanted him back before the 2019 season, so I knew he was on the radar.

"After McLaren did better than Renault last year, maybe it would have changed his mind of what he did."

Norris said the arrival of Ricciardo at McLaren would add some race-winning experience to the team, as well as offering him a new experience by changing teammates for the first time.

"He's got the experience of winning races, and that's something that Carlos didn't, although Carlos is an extremely good driver," Norris said.

"Daniel's obviously just got that bit more experience with working with those top teams and knowing what's exactly needed to win races. So his mentality of that side of things is something that's going to be different from what Carlos had and I think.

"I've never spent two years in any category apart from my first years of karting, and now this is my second year of F1.

"Staying in it and working with a different team-mate is the first time I have been in this situation, so I don't really know what to expect, I think it's still relatively new for me.

"He's got the experience of working with a race-winning team and he knows what's needed from them. Learning from him on that side of things I think is the most valuable part.

"He can also bring a lot to the team and obviously help the team improve as well. I guess we'll find out next year."

No new manufacturers expected to join F1 before 2026

Mercedes back on track as it begins Silverstone test