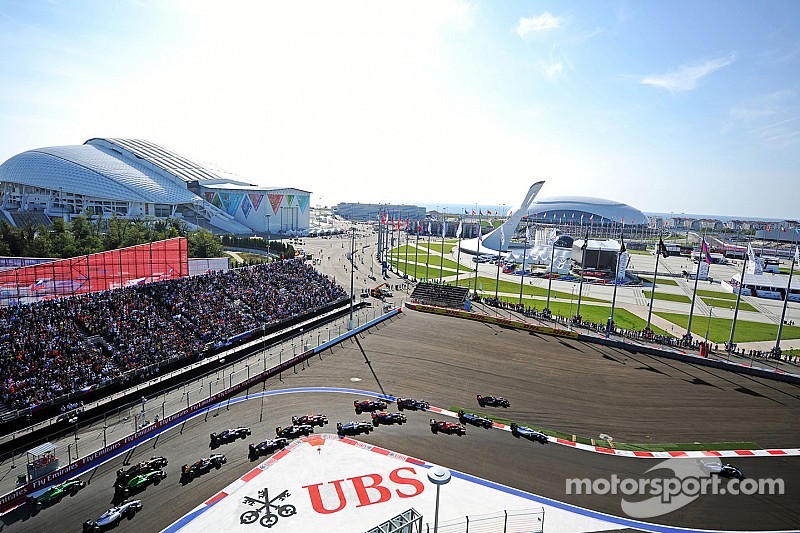 On December 19th, an award ceremony to present the 2014 Race Promoters’ Trophy to the Russian Grand Prix organisers took place at Sochi Autodrom.

The Russian Deputy Prime Minister, Dmitry Kozak, received the legendary cup from Bernie Ecclestone, CEO of Formula One Management (FOM). The award will stay in Russia until the end of 2015.

The honorary participants of the prize giving ceremony, Bernie Ecclestone, Dmitry Kozak, deputy head of the Krasnodar region administration Alexander Saurin and president of the Russian Automobile Federation Viktor Kiryanov reviewed the results of the first operational year of the Formula 1 circuit in Sochi. The prize, which has the names of all of its owners since 1975 engraved, will stay at Sochi Autodrom until the end of the next year.

The announcement regarding the trophy winner was made at the FIA Annual General Assembly at the beginning of December 2014. The Race Promoters' Trophy is traditionally awarded to a Grand Prix organised in the most difficult circumstances. Many factors are taken into account, including the timelines, eventual success of the event and the feedback upon its delivery.

Four years of construction and tense preparation alongside the Sochi 2014 Olympic project preceded the Russian Grand Prix. One of the most complicated challenges was an adjustment of construction schedules of the Olympic facilities and the circuit integration into the Olympic Park infrastructure. However, this construction project proved to be one of the most successful in the recent years. Preparation for the Russian Grand Prix was made in record-breaking time straight after the completion of the Olympic and Paralympic Winter Games. As a result of hard work, the track successfully passed the FIA certification on the 19th of August 2014, which allowed the promoter to host Formula 1 races.

Ahead of the Russian Grand Prix, the organisers and the Federal Customs Service jointly managed to fulfil the task of the F1 teams’ belongings delivery from the previous championship’s stage in Suzuka, which was complicated by weather conditions and the load transfer delay from Japan.

From October 10th to 12th, 2014 the first Russian Grand Prix in history was successfully held. Over 166 thousand people attended the most high-tech autodrom in the Eastern Europe during the racing weekend, including over 500 guests of high rank from Russia and abroad. 3.4 million Russians watched the event on television, which was three times more than the national TV audience of any other Grand Prix.

During the competition’s preparation, Sochi Autodrom recruited over 1,100 volunteers from 12 countries and various regions of Russia and thus contributed to the volunteers’ movement development. The British driver Lewis Hamilton won the Russian Grand Prix as the Finnish racer Valtteri Bottas claimed the fastest lap time of 1:40.896. The Mercedes AMG Petronas team collected 43 points in Sochi and won the Constructors’ Championship for the first time in history.

During the first four months of its debut operational season, Sochi Autodrom proved its status of the all year round venue and hosted over 20 sporting, corporate and educational events with about 200 thousand people as guests and participants. Since November 2014, exercises of the Driving Academy have been held at the autodrom. The Academy includes a sports school for young racers and a training centre for drivers. In the framework of cooperation with the Russian International Olympic University, the Formula 1 Russian Grand Prix promoter takes active part in training staff in sports management.

Bernie Ecclestone, CEO of Formula One Management: “The experience of the Russian Grand Prix organisers is really unique. The event in Sochi has truly become the best of the season. I would like to thank everyone who realised this project in such a short term for courage that made the Russian Formula 1 stage possible. The good thing was that the organisers asked us and listened to the advice we gave.”

Dmitry Kozak, Deputy Prime Minister of the Russian Federation: “To make the Grand Prix project come to life, Russia and the Formula 1 organisers followed a way that lasted for several decades. We have faced an important and challenging task to construct the most modern world-class autodrom together with the Olympic Winter Games’ preparation. For this kind of systematic infrastructural reforms, many countries needed decades as we have managed to cope in just six years. Sochi Autodrom’s recognition as the best motorsport facility symbolised the triumph of this hard work. However, it was important not only to create infrastructure but to organise the event on the highest level possible, so I want to thank all those who was involved in preparation of the best Grand Prix in the world in 2014.”

Sergey Vorobyev, Formula 1 Russian Grand Prix promoter: “In the course of the last month, the Sochi Autodrom team has received recognition of the international motorsport community on two occasions. The Russian Grand Prix has become regular in the F1 calendar as the championship’s stage that attracts special attention. I wish to thank the team of constructors, consultants, organisers, volunteers and, certainly, spectators for creating a big sporting holiday with unforgettable atmosphere. Thank you everyone who believed in us and, firstly, to the Government of the Russian Federation and the Krasnodar region administration whose support made it possible to hold the race in Russia. Formula 1 is staying a priority for Sochi Autodrom but it is not a single project as the circuit is used for a wide range of motorsport and commercial events. We are glad to see guests here all the year round.”