20 years ago Brazil held a farewell party for one of its greatest champion in the history of sports, Ayrton Senna.

It was an irreparable loss for the country and the world.

Emerson Fittipaldi, who met Ayrton as a boy, when he raced go-karts, remembers the fellow countryman with much regret.

"I knew Ayrton when he drove a kart at the Autódromo José Carlos track. At that time he was winning everything in Brazilian karting and because of that, I had already heard about him. One day his father, Milton, approached me and asked me for some advice. I told him he should find Ralph Firman Sr., who had been my mechanic and who founded the legendary Van Diemen Formula Ford team in 1973. I think I gave good advice. Senna and Ralph closed a contract and Ayrton piloted, with much success, Van Diemen cars. He won the English Championship Ford 1600, in 1981," said Fittipaldi.

There began a new success story in world Motorsport with Senna becoming three times a World Champion. Fittipaldi remembers the performances of Senna.

"People always ask me who was the best driver of all time, and this is a very difficult question to answer when trying to match racers of different eras. But in my opinion, Ayrton was the best,” said Emerson.

Fittipaldi planned to run with Senna in Indy, while still driving for the powerful Team Penske. 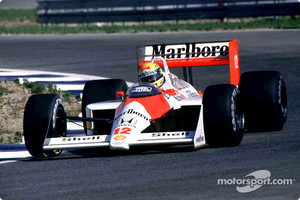 "At the time I won the Indianapolis 500, I was good friends with Ayrton. My dream was to race the 500 miles with him and asked why he did not test the Indycar. Roger Penske would enter a third car for Senna,” Fittipaldi said.

“We were at the pinnacle of our careers. We went to the United States, where he saw the tests and came to drive. In Phoenix, on the one mile oval circuit, Roger Penske didn't let Ayrton drive because he was afraid of Senna driving too fast and getting hurt. It would have been great to have the opportunity to run with Nigel Mansell and Ayrton that year.”

A year later, Ayrton would suffer the accident that took his life, at Imola.

Fans of Motorsport and Senna probably will remember where they were when they heard of the death of Senna, May 1, 1994.

Fittipaldi also will never forget that day that would be scarred forever in the lives of Brazilians.

"I was testing out an IndyCar at Michigan Speedway. I remember to this day that it was a test on a full tank of gas and we needed 28 laps. There by the 17th lap, the head of the team called: ' IN! IN! ‘,” he said.

“At the same time I took my foot off the accelerator and asked if there was something wrong with the car, because I had 10 more laps to complete the test. I was on edge with a full tank of gas. They said the car was ok. When I entered the box, my wife was on the phone. Never in my life have I had a crew chief asked me to answer the phone during a test. I thought it was some tragedy in my family, that something could have happened to my kids. When I heard of the death of Ayrton, it was a shock. To me, he was immortal. I think for all of us. I believed that it would never happen.”

Ayrton Senna will always be remembered by his friend in Motorsport and life, Emerson Fittipaldi.

"In addition to an exceptional pilot, he was a wonderful human being and a great heart," he said.

Ayrton did not truly die