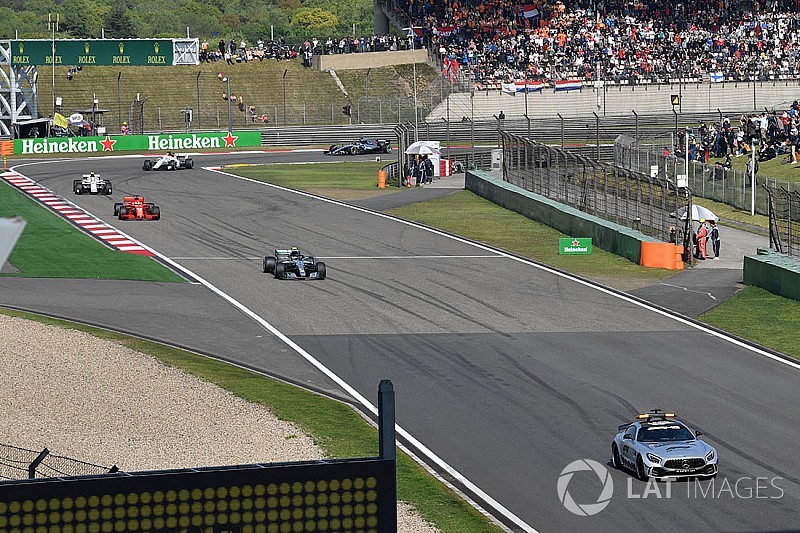 Mercedes F1 team chief strategist James Vowles admits that the team didn’t anticipate a switch to soft tyres under the safety car in China would be as successful as it proved to be for the Red Bull Racing drivers.

When the safety car came out, the Brackley team opted to leave Lewis Hamilton out on track, despite the neutralisation creating an opportunity to bring him in. Leaders Sebastian Vettel and Valtteri Bottas were unable to take the chance when the yellow was thrown after they had passed the ‘safety car one’ line.

Meantime, Red Bull chose to pit both Max Verstappen, who was in front of Hamilton, and Daniel Ricciardo, who was behind him – and both proved to be very fast on fresh soft tyres and were able to charge through the field, with the Australian ultimately winning.

Vowles insisted that the lack of passing in the first part of the race suggested that such a difference in tyre compound and performance would not be significant enough to justify a stop.

“The situation across the race at that point was that cars weren’t really overtaking,” Vowles said in a Mercedes video clip. “Even when there was a difference in compound between them. On stint one of the race you had a mixture of cars on soft and medium, no-one was overtaking each other.

“We had Kimi in front [of Hamilton] on the soft tyre, no difference between the two cars, we couldn’t even get close. Same for Valtteri at the front with Vettel. But those were obviously on the same tyres. Verstappen was on the ultrasoft tyre, a tyre that was very sensitive and very difficult, and neither Kimi nor Lewis could make any inroads into him at all. So on a track like that the difference between compounds wasn’t working out.”

Vowles said that when the safety car emerged the key consideration was track position, and how many places Hamilton would lose if he did pit.

“Under that safety car condition we always review how many positions we can potentially gain, and how many positions we may lose,” he added. “So first of all, what would we have gained? Verstappen ahead, we knew there was a chance they would come in with the safety car, and if that were to happen, it would put Lewis back up into a podium position, if we can take that medium to the end of the race and defend against those cars behind us.

“Now, the medium on our car was working very, very well. Indeed, we knew that you could do 40 laps on it, which is what you saw at the end of the race with Valtteri, that tyre was working at the end of the race. So the first question is, is a 10-lap old medium going to suffer? The next question is, how many positions are we going to lose behind us?

“We knew Ricciardo was in our window, so if he didn’t stop, we’d drop behind him. But furthermore we had Kimi, and Kimi had stayed out very, very long, and he was back into what we call the safety car window for Lewis – which meant it would be very, very marginal if Lewis was going to come out behind Kimi.

Vowles admits that the team didn’t expect the soft to be so fast in the last part of the race: “It was a decision that when we laid out all the facts on the table, we didn’t believe, based on the earlier evidence, that there would be enough performance differential for a soft to overtake a medium, even one that’s 10 laps old.

“The reality of the situation is that everyone saw what happened – both Red Bulls were extraordinarily quick on that tyre and were able to just scythe through the field, making their way up to the front.”

Video: Why Vettel's safety car gripe is off the mark