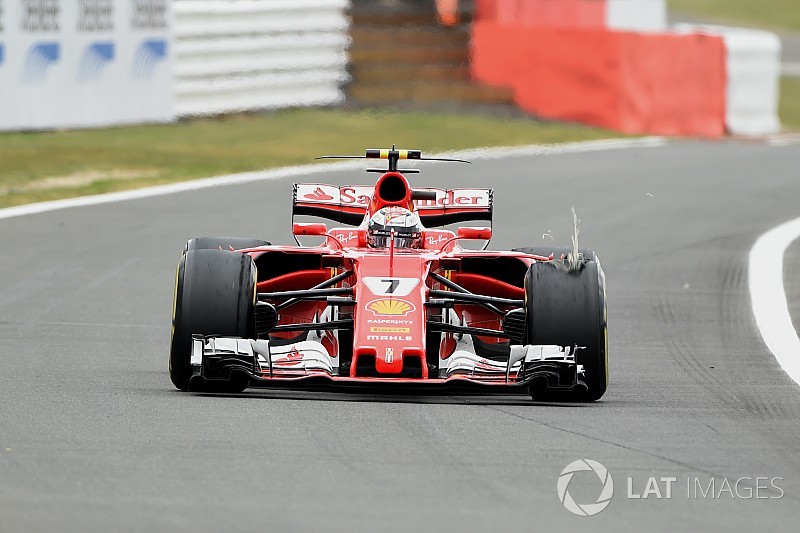 Kimi Raikkonen's tyre problem at the British Grand Prix was caused by external damage rather than a structural or wear issue, Pirelli has concluded.

Following detail examination of the front-left tyre that came apart two laps before the end of the Silverstone race, Pirelli is confident that fatigue or a design problem were not to blame.

Instead its examination suggests that two impacts on the belt area of the tyre - potentially caused by a kerb - triggered the problem that forced a late pitstop.

In a statement issued on Wednesday night it said: "This damage is not present throughout any other areas of the tyre whatsoever. Furthermore, the belt and the structure do not show any signs of fatigue.

"The possible initial cause of this damage is consistent with contact against an external body, leading to a partial separation of the belt from the carcass in the two affected areas. In one of these two places, as a logical consequence, part of the tread also became detached."

In a bid to better understand the problem, Pirelli conducted tests on other tyres used at the British GP to see if there were hints that others could have faced problems.

However, its analysis showed that all other tyres were structurally sound.

The statement added: "On no occasion was there any sign of fatigue, detachment or laceration – or even the beginning of such problems – that affected the structure of the tyre.

"In conclusion, Pirelli can confirm that no issues have emerged connected with the tyre itself."

Raikkonen's teammate Sebastian Vettel suffered a tyre failure on the penultimate lap, which was triggered by a slow puncture.

Due to the damage caused to the tyre as Vettel returned to the pits, Pirelli had been unable to uncover what led to the puncture.