Fernando Alonso has named Mercedes as a dark horse for the 2012 season. 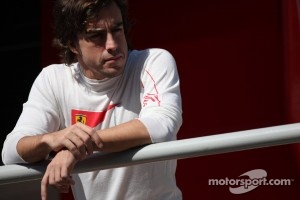 Together at the German marque's new works team since 2010, Michael Schumacher's return to F1 has been the subject of much criticism while it has been said teammate Nico Rosberg could go his entire career without a win.

But Alonso, the lead driver at Ferrari, insists he does not underestimate the German duo, or the Ross Brawn-led Mercedes team, even though they were soundly beaten by Red Bull, McLaren and Ferrari in 2011.

"In Formula One, the car is always the most important (element)," the Spaniard is quoted by EFE news agency.

"We know that Mercedes didn't have a great year but we have to respect them. With a car capable of winning races, Rosberg and Michael are among the favourites," said Alonso.

Rosberg and Michael are among the favourites

In fact, when contemplating the field of 2012, 30-year-old Alonso insists Schumacher - 43 next month - remains the reference for his rivals.

"I say (it's) Schumacher, because we all respect a driver who has been champion seven times.

"He has always been very fast and there is nothing left for him to prove," he added.