BMW's motor sport boss has refused to comment on speculation Nick Heidfeld could move from Formula One to the DTM series next year. 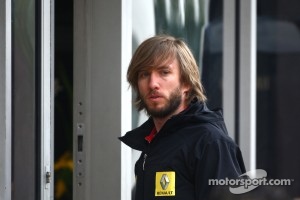 German Heidfeld, 34, was appointed as injured Robert Kubica's replacement for 2011, but Renault has now dumped him in favour of Bruno Senna.

It is being reported that talks between Heidfeld and his former employer BMW, no longer in F1 but to tackle the German touring car series DTM next year, have already begun.

With Andy Priaulx and Augusto Farfus already confirmed for 2012, there are still four official BMW M3 cockpits to fill.

"We have always said we would look first at the drivers from our own programme," Jens Marquardt, who has replaced Mario Theissen as BMW's motor sport director, told the German news agency SID.

When asked if Heidfeld is a candidate, he answered: "We do not comment on rumours.

"I am confident that we will have a competitive driver lineup in 2012," he is also quoted by sport1.de, denying that BMW will look specifically for a German driver.