Jenson Button is the "best number 2" in Formula One, and his laid-back style is because he is happy to retire without adding a second world championship.

That is the typically outspoken claim of former Ferrari and Jaguar driver Eddie Irvine.

"Jenson is doing nothing special. He just does a reasonable job," the Ulsterman told Germany's Auto Bild Motorsport amid suggestions the 2009 world champion has got the upper hand on his McLaren teammate Lewis Hamilton this season. 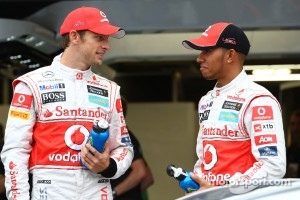 Irvine said of Button: "He knows he will never again be world champion and he drives accordingly. Lewis on the other hand absolutely wants to be champion again and so he's too aggressive.

"He fights not only against the others but against himself; in some races he has been simply stupid," said the 45-year-old Ulsterman.

He fights not only against the others but against himself

Irvine said he would like to see Hamilton switch to Red Bull.

"Then we will see how good (Sebastian) Vettel is," he insisted. "And we really would, because one thing we already know is that Hamilton has beaten Alonso in the same team."

Irvine said German Vettel, 24, is clearly "very, very good, but many drivers have taken a title in Newey's car. And, for me, his teammate Webber is not a top driver"