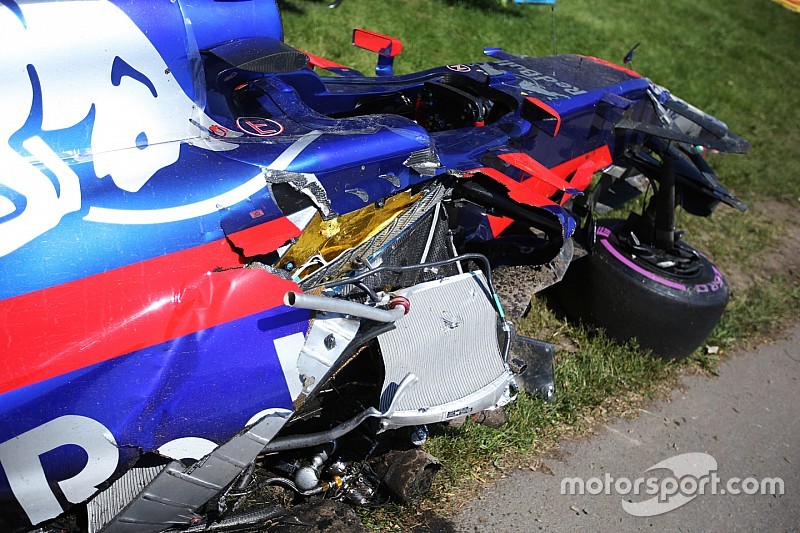 Haas team boss Gunther Steiner thinks it ridiculous that Carlos Sainz has blamed the lack of visibility from his mirrors for the crash with Romain Grosjean at the Canadian Grand Prix.

Sainz clashed with Grosjean on the opening lap in Montreal, after being caught out when he failed to notice the Frenchman was alongside him.

The Spaniard insisted in the aftermath of the accident that Grosjean had been in his blind spot, and that the view offered by F1's 2017 mirrors is limited.

"We've all been complaining, he said. "We all know what's happening this year with the low rear wings, having the mirrors just in front of us doesn't give you a clear picture of what's happening around you and that's it. The FIA always find a solution for this kind of thing."

Steiner, however, said that if Sainz knew there was an issue, he should have done something to make sure he could see better what is going on behind him.

"If he knew before they [the mirrors] were too small, they should have changed them," said Steiner. "That is not our problem. If he has got too small mirrors, that is quite a dull excuse.

"You can't say, 'Oh my mirrors are too small and I can't see, but I keep on using them!' It's like if we give you glasses and you cannot see with them, but you keep using them, know you cannot see, and keep running into the wall!"

Sainz was handed a three-place grid penalty of the next race in Baku for his part in the opening lap crash, which also took out Felipe Massa.

Grosjean was able to recover from the Sainz incident to take 10th place, after electing to run with the same set of tyres fitted at the end of lap one when his car damage was fixed.

Steiner also said he was not too happy that Kevin Magnussen was handed a penalty for overtaking Stoffel Vandoorne under a Virtual Safety Car – especially because the Dane gave the position back afterwards when he realised he had made a mistake.

"He gave the position back," said Steiner. "If somebody is penalised, it seems to be always us, and I don't think we are that bad!

"Kevin did wrong, he shouldn't have started so early, but he gave it back immediately and I actually need to look at it again, as I am still not sure about the regulations and how it is written.

"Yes, he did overtake under the VSC, which he shouldn't. But he gave it back. Maybe it was better to stay in front!"