There remains a chance Imola might return to the Formula One calendar. 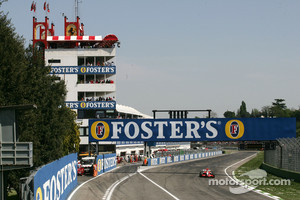 The famous Italian circuit last hosted the San Marino Grand Prix in 2006, when delayed renovations and an increase in the race sanctioning fee moved Bernie Ecclestone to admit: "I'm sorry, but we have lost Imola."

Since then, there have been changes, including the complete rebuild of the pits, pitlane and paddock overseen by F1 track architect Hermann Tilke.

But Imola, officially called the Autodromo Enzo e Dino Ferrari, was granted a 1T rating, making it usable by Formula One only for testing.

It now emerges, however, that the track has received the top '1' FIA homologation rating after a recent inspection by Charlie Whiting.

"We are proud of the objective reached," said circuit chief Walter Sciacca, "which is a clear sign that we are working in the right direction.

"With this approval we are in a position to once again host a Formula One Grand Prix. So we don't limit ourselves; if we experience the right economic conditions, we are ready to face any challenge."