Niki Lauda has admitted he is no fan of the overtaking innovation 'DRS' that debuted in 2011.

The system, which allows a chasing driver to move a flap in the rear wing and increase top speed when he is close to his rival, is set to be retained and even ramped up for next season. 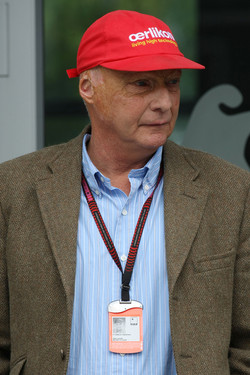 The BBC reports that in Melbourne next March, for instance, there could be two DRS zones, while other zones - like at Valencia - will be extended.

The system was designed by a working group including McLaren's technical director Paddy Lowe, who insists DRS was a good idea amid the long debate about tweaking the cars to boost overtaking.

"What's great (is) at least we can move on from this debate of trying to change the aerodynamic characteristics of cars to try to improve overtaking," he said.

"We've found something much more authoritative, much cheaper, easier and more effective, and adjustable from race to race."

Many purists, however, are unhappy, arguing that overtaking can now be too easy, has been devalued, while the spectacle of a driver successfully holding off his charging rival is diminished. "You've got to take the rough with the smooth to a certain extent," argues the FIA's Charlie Whiting.

"To see passing at the push of a button is fundamentally the wrong direction (for F1)," he insisted.

"The front man (the driver in front) is totally defenceless. I think from the sporting point of view it is not right."

He also thinks DRS has proved unnecessary, with new supplier Pirelli's heavily-degrading tyres credited for much of the success of the racing in 2011.

"This (Pirelli's approach) is okay," said television pundit Lauda, who is reportedly arguing with the German broadcaster RTL about the size of his fee for F1's 2011 season.

"There is enough overtaking already because of the tyres, which often have to be taken right to the limit by the drivers," he explained.

"And they pose the engineers with the task of making tyre-friendly tyres."

Race of my life: Niki Lauda on the 1984 Portuguese GP