Red Bull and Ferrari will fight it out for victory this weekend, David Coulthard has predicted.

"It would appear that Ferrari and Red Bull have the edge on McLaren," the Scot, a veteran of almost 250 Grands Prix, surmised after watching the practice sessions at the Nurburgring on Friday. 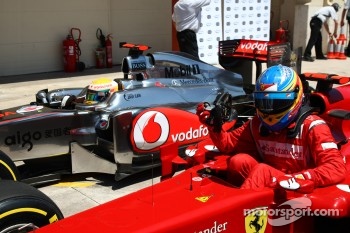 "Red Bull have taken pole at every race this year and I would expect that trend to continue," he told the Telegraph.

It is a neat summary in the wake of Ferrari's continued resurgence and the fact that McLaren, as at Silverstone two weeks ago, appears to have taken a step backwards.

Also looking stronger is Mark Webber, with his team orders stoush with Red Bull and Sebastian Vettel appearing to have given him wings.

At the same time, championship leader Vettel appeared to struggle somewhat in front of his home crowd, but forecast rain and low temperatures could give him the edge over Ferrari in the coming days.

"In the rain we still have a problem," admitted Silverstone winner Fernando Alonso to Auto Motor und Sport. "The worst thing for us is a wet and cold track."

With his 80 point lead, however, the weather is a minor concern for the bigger picture. More important for Alonso is a consistently quick car -- and for McLaren to improve.

"I need six or seven 'teammates' to be able to finish ahead of Vettel and take points off him. Otherwise it (the title) is going to be difficult," he said.

There are also mind games at play, with McLaren's Jenson Button openly admitting to trying all he can off the circuit to add to the current tension at Red Bull.

"I love it that there is a disagreement. It is what McLaren need," he said.