Interlagos has often thrown up some spectacular races and intense title battles, but perhaps none was more spectacular nor more unpredictable that the 2012 season finale.

Sebastian Vettel and Fernando Alonso had gone in to the Brazilian GP battling for the world title, with Vettel defending a comfortable cushion at the head of the standings.

But despite the tall order that Alonso needed, his hopes took a massive boost early on when Vettel got involved in a first lap tangle.

However, the German somehow managed to bring his car home and grab the points he needed for the title, with Jenson Button delivering a famous win for McLaren - the squad's most recent in grand prix racing. 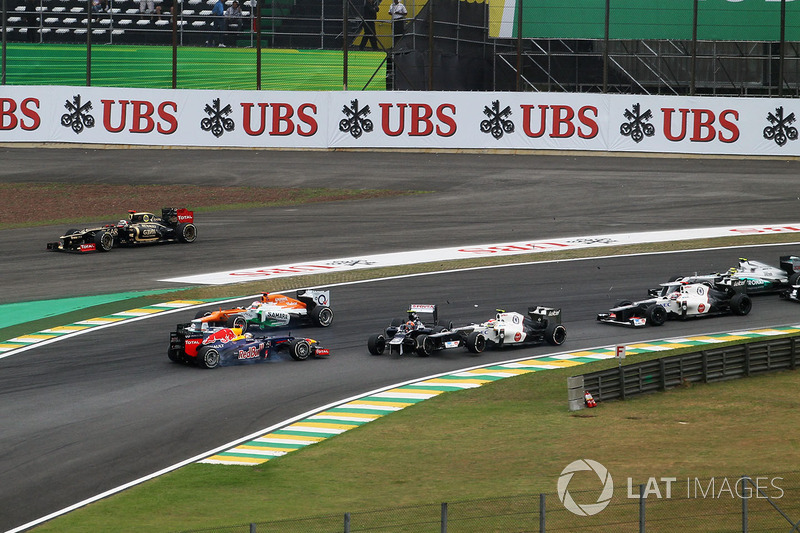 And despite further trouble at a pit stop, the fact he was able to still come through and grab the crown left him clear about how difficult an afternoon he had had.

"I think it was the toughest [race we had], but we kept believing and remained ourselves," he said.

"A lot of people tried to use dirty tricks, certain things that from our point of view that were beyond the limit and we never got irritated or distracted by that. We gave a big push to the end." 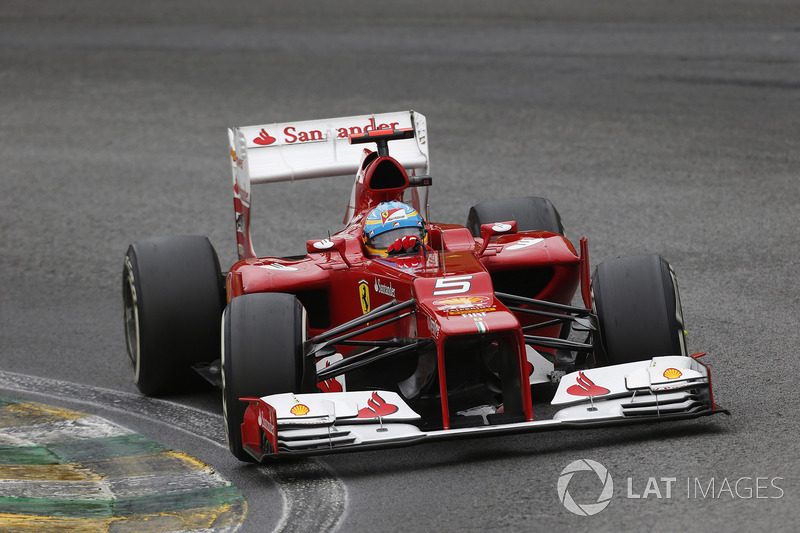 Although Alonso was clearly disappointed to have missed out on the title, especially after seeing how close Vettel had been to being out of the race, he still reflected on a good season.

"There's been situations during the season that make you think of these three points, but that's the sport. Even though I finished second in the points I have never had such respect and the affection from everybody in the paddock.

"This is the first time that I have got drivers, ex-drivers, teams, fans to say that we have done the best championship. We'll be back as strong in 2013, because it would be harder to be stronger. I have a great feeling after 2012, by far the best year of my career." 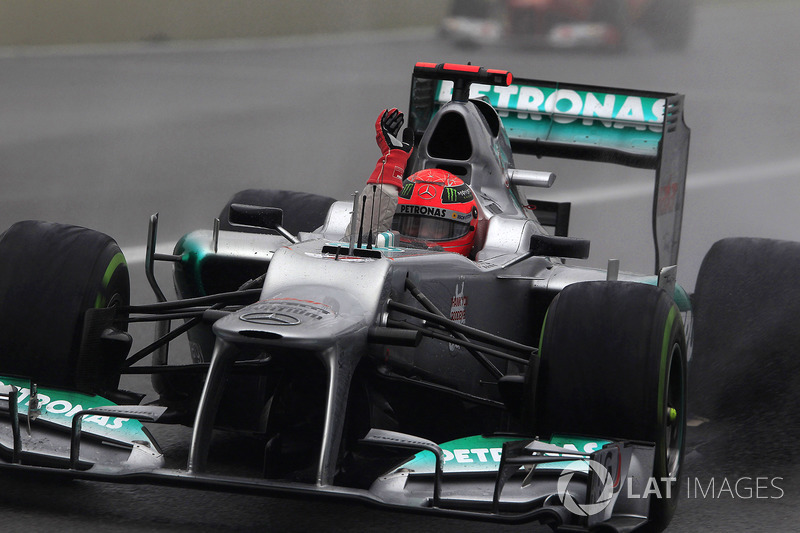 Perhaps lost a little amid the focus on the world championship fight was that Brazil marked Michael Schumacher’s final Formula 1 outing.

The German’s return to grand prix racing with Mercedes had not delivered the success he had perhaps hoped for: but he said he was bowing out of F1 with his head held high as he took some points with seventh place.

"It has been a beautiful time," said Schumacher. "Lots of exciting moments we shared, and lots of tough moments.

"The most incredible thing in a way is that I felt a lot of support in these last three years and they have been the most difficult years for me. But the fans have always been behind me."

Hamilton not happy with Hulkenberg 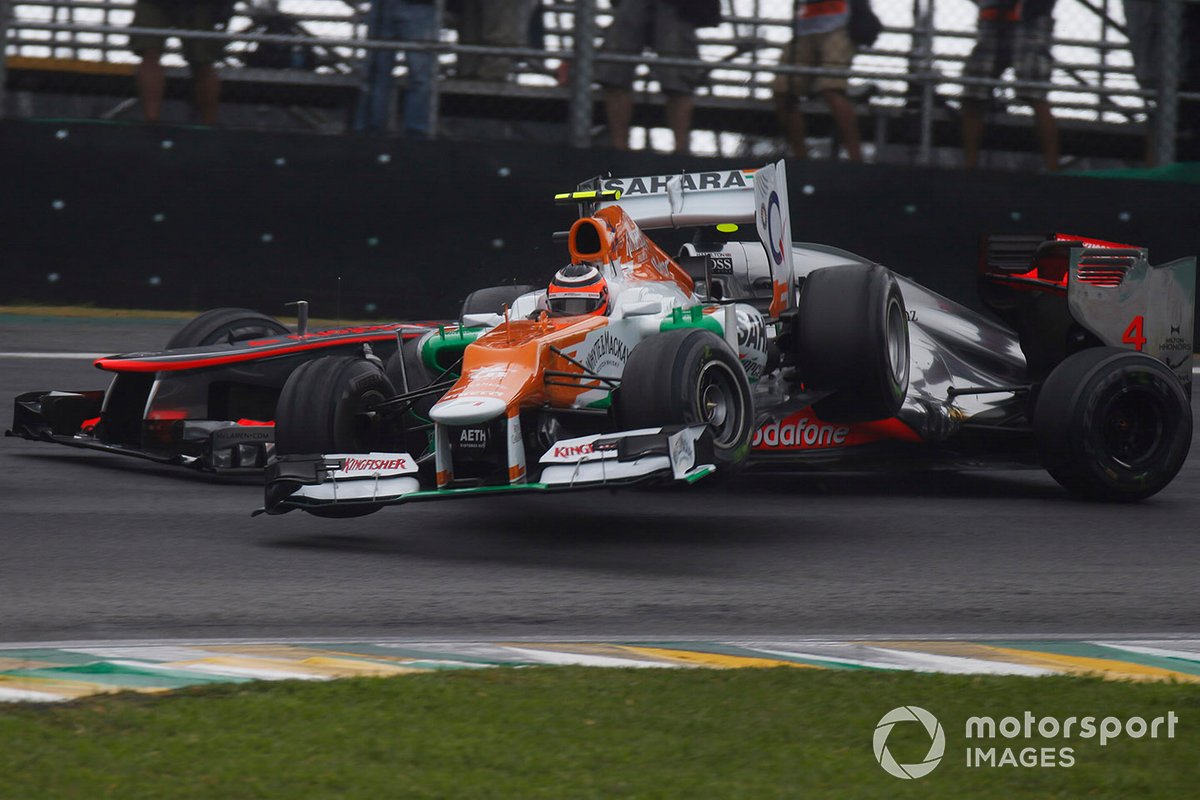 The 2012 Brazil race is the one event that leaves Nico Hulkenberg upset even now – with it perhaps offering him his best chance of winning a grand prix.

As he bowed out of F1 last year, the German admitted that he still felt pain when replays of the 2012 race were shown.

"I'm leading and I watched it all over again and my heart was bleeding," he said last year after watching a replay.

"Yeah, that was the day. I mean, before the safety car I was leading by 50 seconds. So that was a special race, a special day, a very young Hulk. That was one of the special drives from the history books."

Hulkenberg’s victory hopes were dashed when he collided with Lewis Hamilton as they were battling for the lead.

The incident gave Hulkenberg a drive-through penalty and put him out of contention for the win: and it also left Hamilton far from impressed.

"It was a little bit unfortunate," said Hamilton. "The dude didn't even say sorry. So that says a lot. That's what happens when you race with the less experienced. I feel OK, and I feel happy for the team to get the win."

Leclerc: Drivers will find it tough to return to F1 "bubble"