Pastor Maldonado is confident he will have a better second season in Formula One. 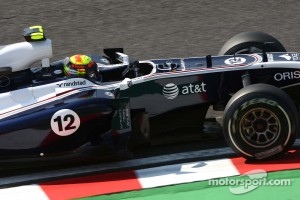 With his Venezuelan backing, the 26-year-old made his Grand Prix debut as the reigning GP2 champion this year, but scored only one of Williams' 5 points.

He is staying with the famous British team in 2012.

"I trust the team because it is impossible to be worse than this year," Maldonado told Brazil's Totalrace.

"I believe that was the worst position for a rookie (to be in), when nothing works, especially in the first year (as) you have to learn many things.

"Nevertheless, I defended myself well, even against Rubens (Barrichello). It certainly was a year of learning."

Williams, indeed, had a disastrous season, finishing 36 points behind the next-worst team Toro Rosso and ahead only of the non-points scoring three newest teams.

We have worked really hard to grow as a team

"I'm sure we will improve," said Maldonado, "we have worked really hard to grow as a team."

A fundamental change for 2012 is the new technical boss Mike Coughlan, the former McLaren chief designer who was sacked a few years ago amid the 'liegate' scandal.

"I hope we have a better car, one that is more competitive so that we can always fight for points and higher positions," said Maldonado.

Todt: Domenicali in 'eye of the storm' at Ferrari