Ferrari: A quiet afternoon in Sochi 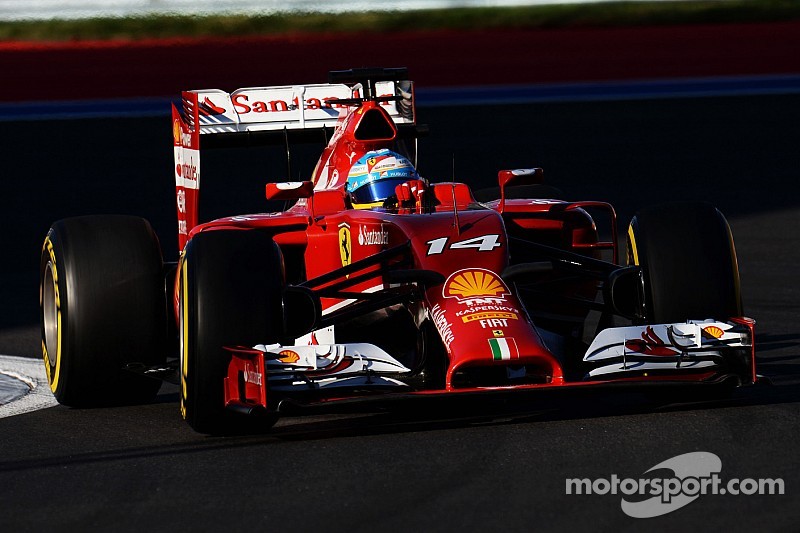 Sochi, 12 October – Before the start of the Russian Grand Prix, all the drivers gathered at the front of the grid in a gesture of support for Jules Bianchi and it has to be said that the inaugural event at Sochi was itself something of a subdued affair.

As predicted there were precious few overtaking moves, partly because of the fact that there was very little tyre wear with either compound: having lined up seventh on the grid, Fernando Alonso brought his F14 T home in sixth place, while Kimi Raikkonen dropped one place from his starting position to finish ninth.

Lewis Hamilton was never really challenged to take his ninth win of the season from pole position, while team-mate Nico Rosberg, who dropped to the back of the pack fought his way back to make it a Mercedes one-two. The result sees the Anglo-German team secure the Constructors’ Championship title with three races to spare. These two were joined on the podium by Valtteri Bottas for Williams.

The back-to-back Japan-Russia trip has been a difficult one for our team, both on and off the track.

At the start, Rosberg cut the corner at Turn 2 to take the lead and was told to give the position back to Hamilton, but the German pitted at the end of lap 1 with flat spotted tyres. Fitting the Medium Pirellis, he then drove 52 of the 53 laps on the same set. Massa also came in to the pits in the Williams.

Fernando showed his usual lightning reflexes when the red lights went out to shoot up the order from seventh on the grid, but while Kimi was equally quick off the mark, he got squeezed up against the wall by a Toro Rosso and had to lift and lost momentum and position, dropping to tenth. The Finn was up to ninth by lap 5 passing Kvyat. He was now in a Toro Rosso sandwich, closing on seventh placed Vergne, with Kvyat 0.8 behind the F14 T.

Lap 25 saw Fernando come in for his only planned stop to take on the Medium tyre. It wasn’t the best of pit stops, as there was a problem with the front jack and this cost him a place in favour of Magnussen. Lap 26 and Bottas brought the Williams in from second spot and Magnussen pitted the McLaren from third. They were joined by Kimi who took on his set of Mediums, ready to head for the flag. Race leader Hamilton made his stop on lap 27, also taking on Mediums.

On lap 31, Rosberg passed Bottas to regain his grid position behind the leader Hamilton. That was the top three order decided and in fact, with the two McLarens comfortably fourth and fifth, Fernando had to keep an eye on the mirrors with Ricciardo in the Red Bull closing, ahead of his eighth placed team-mate Vettel, but the attack never materialised. Kimi also put in a gritty drive, both Scuderia men effectively having to deal with the superior speed of their Mercedes-powered adversaries.

The first ever Formula 1 Grand Prix to be held in Russia was greeted with great enthusiasm, so it’s a shame it was not the most exciting of races, but now the teams and the tyre supplier know what to expect, that could all change next year. With three races remaining, Scuderia Ferrari is still fighting for third place in the Constructors’ championship with Williams, the English team having a 28 point advantage. The next opportunity to close that gap comes after a three week break when the F1 circus sets up camp in Austin, Texas for the United States Grand Prix.

Marco Mattiacci: “Once again, we find ourselves confronting a result that is a long way off our goals, but today, we must congratulate Mercedes who, after five years of hard work, have taken a well deserved Constructors’ title.

The back-to-back Japan-Russia trip has been a difficult one for our team, both on and off the track. In both races, we have learned a lot that will be useful for the future, in terms of how to improve on a technical level, but also when it comes to safety.

I’m sure the final three races will provide an opportunity to try and get the most out of the team and the car, in order to end the season achieving better results. While my thoughts and those of everyone are still with Jules, today I would like to thank Luca di Montezemolo, at what has been the final Grand Prix under his Presidency at Ferrari. I think we have been fortunate to work with a great manager like him and it will be exactly the same with a successor of the calibre of Sergio Marchionne.”

Fernando Alonso: “Today’s race followed the pattern set in the earlier part of a weekend in which we didn’t manage to be competitive, even if the car worked well from start to finish. The entire race was particularly demanding from the point of view of managing the fuel consumption and especially in the closing stages, I had to save fuel. During the pit stop, the front jack didn’t work, but I think that even without this problem, I’d have finished in the same position, because the McLarens were faster.

We took a risk at the start because we knew it was an opportunity to make up some places, but after that, my race pace was what we’d seen to date and it wasn’t possible to do any more. We have not picked up many points, but we will continue to give it our all in the last three races, because third place in the Constructors’ championship is still a possibility, even if at the moment, the most important thing is to get some good news about Jules as soon as possible.”

Kimi Raikkonen: “We knew we could expect a very demanding race and that starting from far back it would not be easy to move up the order, but at the start we did very well. Unfortunately a Toro Rosso squeezed me towards the wall once we were on the straight. Because I had to brake hard, various cars passed me and I lost any chance of having a good race, because from then on I was always stuck behind other cars.

The car handled well and with a clear track I had a good pace, but we lacked top speed with which to try and overtake on the straight and having to save fuel meant I couldn’t push as hard as I wanted to. We are aware that this year it’s hard to fight for the top places, but all the same, we will continue to try our best, starting with the very next race in Austin.

That track is very demanding and interesting and I hope I don’t have the same problems I had here, so that I can aim for a good result. However, what I wish for most is that all our prayers help Jules at this difficult time.”

Pat Fry: “Contrary to expectation, the Safety Car didn’t make an appearance today and the race was relatively straightforward to interpret, with a single stop for both our drivers. I think fuel saving affected almost the entire field and that influenced the spectacle. Fernando and Kimi both got away well at the start, but while the former made up two places, the latter had to lift off the throttle, because he was squeezed towards the wall by a Toro Rosso.

From then on, Kimi was stuck in a train of cars for the first half of the race, but after the pit stop he settled into a good pace, matching Fernando’s. Unfortunately, in his case, we regret that he lost a place to Magnussen, as the front jack collapsed at his pit stop.

Today we had a very similar race pace to Red Bull, while McLaren had a bit extra and it was difficult to attack them, even at the start with the DRS. While congratulating Mercedes for winning the Constructors’ Championship, we are still determined to keep fighting for as long as possible with Williams for third place.”