Ferrari Formula 1 boss Mattia Binotto has conceded Mercedes made the “right gamble” on strategy to win the Mexican Grand Prix and his team could have taken “more risks”.

Charles Leclerc and Sebastian Vettel started the race at the Autodromo Hermanos Rodriguez from the front row and led the opening stint.

However, Leclerc forfeited track position early by committing to a two-stop strategy, while Vettel slipped behind eventual race winner Lewis Hamilton by making his sole stop later than the Mercedes driver.

Binotto said it only became clear the one-stop was the superior strategy “very late”.

“When Charles stopped it was still too early to gamble on the one stop, it would have been too risky, especially being ahead as he was,” said Binotto. “Not only for tyre degradation but for wear as well. That’s something you can look at and analyse in the data.

“Certainly the gamble they [Mercedes] did today was the right gamble. They took some risks to win and I think the risk went to their merit. That’s the way it is, maybe we should have taken more risks.  It’s difficult to judge. After the result it’s easy to say yes.”

Leclerc eventually finished fourth, the leading two-stop runner, and said he was “disappointed” to fail to convert pole into victory for the second time in three races.

He said that Ferrari reacted early to cover the Red Bull of Alex Albon, which was in close proximity during the opening stint and the first to commit to a two-stop strategy.

“Every time you start first you want to win,” he said. “The two last times I’ve started first I didn’t win. So I’m not happy with that. Today it’s pretty clear why, and we’ll learn from this.

“We wanted to cover Albon at first, which we did, and from then it was difficult to do better. With the two stops it was very difficult to stay behind the cars and to overtake at the end, even with a very good pitstop.”

Leclerc said immediately after the race he should have insisted on a different strategy more over the radio, but later in the evening said he had changed that view.

“Looking back on my radio messages, I’ve been asked what was the state of the tyres,” he said. “I replied. I think it was pretty clear.

“I simply think we thought it was the best solution for us to cover Albon’s position at that time. I made my point clear.” 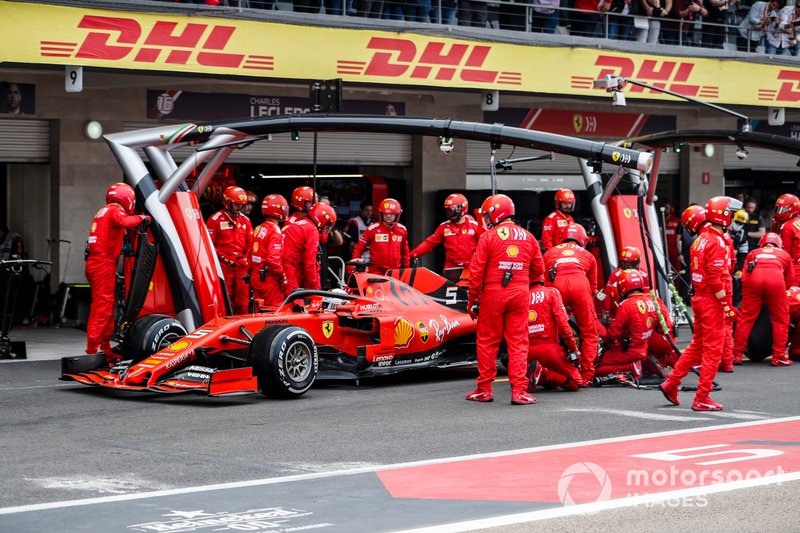 While Leclerc lost out because of the wrong strategy, teammate Vettel could only finish second despite stopping once like Hamilton.

Binotto said Ferrari was put in a difficult position by Hamilton stopping first because it guaranteed Vettel would lose track position even if Vettel stopped the next lap.

“If he’d come in he would have been behind,” said Binotto. “Because already in the first sector Hamilton was fast enough to stay ahead.

“So being behind, the best way was to stay out. We stayed out to have some advantage in the last part of the race with fresher tyres.”

Mercedes admitted after the race that it seemed “almost impossible” Hamilton would be able to complete his second stint on hard tyres, having stopped 14 laps before Vettel.

In the end, Hamilton’s 47-lap stint was nowhere near the longest of the race, with Max Verstappen completing 66 laps on the hards after an early puncture.

Binotto added: “After Friday and Saturday we were certainly not expecting such a long life on the tyres.

“I think everybody was quite surprised, even the people pitting very early for a one-stop took a gamble. I don’t think it was their initial intention.”