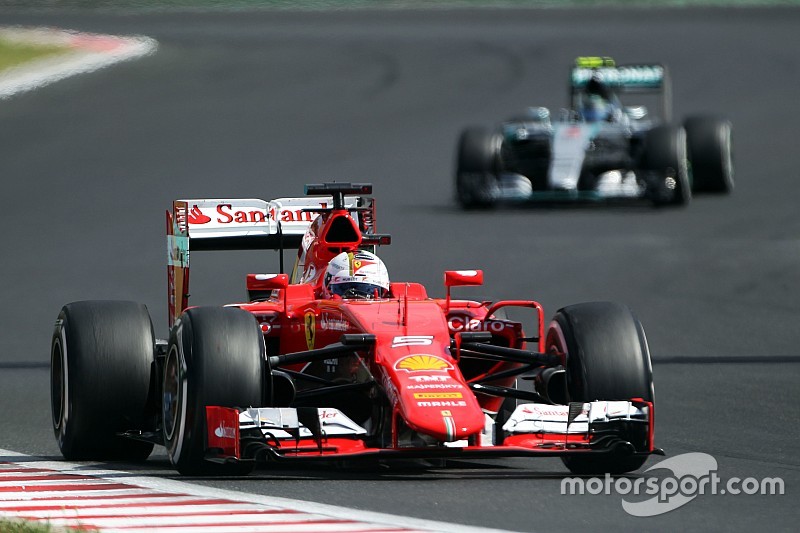 Sebastian Vettel delivered his second win of the season at the Hungaroring, after he was able to control the race from the front following a blistering start from the second row of the grid.

But rather than the win being a sign of a big step forward that could turn around the campaign, Arrivabene has no doubts form between the two teams will continue to fluctuate.

Although Mercedes did not have the pace to stop Ferrari in Hungary, its situation was partly disguised by the fact that Lewis Hamilton was stuck in traffic and Nico Rosberg had a set-up he did not like.

That is why Arrivabene thinks it wrong to suggest Mercedes has fallen back, or that the gap between the teams has been miraculously cut.

"At the beginning of the season it [the gap to Mercedes] was quite big," he said. "Then we were able to nearly catch up.

"We continued our development but they also developed their car, so they also fly away again. This story of the season is going to be this one.

"They are the strongest team. I recognise that. I think sometimes we are able to catch them up, to win races like here and in Malaysia, or sometimes they fly away.

"This is the story of this year, it is down to us and our data, but we are in the right direction."

Although not believing Ferrari is a match for Mercedes everywhere, Arrivabene does think there is potential for more success at some events.

"It is not [since] yesterday that I have been in F1," he explained. "It has happened many times that a team is rushing [forward] at the beginning, then you have a pause, and then you rush again. Here is the story of this championship.

"If you are on the Mercedes side, these guys are strong everywhere. But as I said two races ago – we were expecting to have good races, and bad races, during the course of the season.

"It doesn't mean we are stepping back. You have to consider that sometimes the others are going up. So we need to catch up – we need to do our job. In general, I have to say the direction that we took is good.

He added: "Even the best team, the team that is at the top, sometimes they have a failure but then they go up again. It doesn't mean the others are stepping back."

Horner: Ricciardo was on victory charge in Hungary