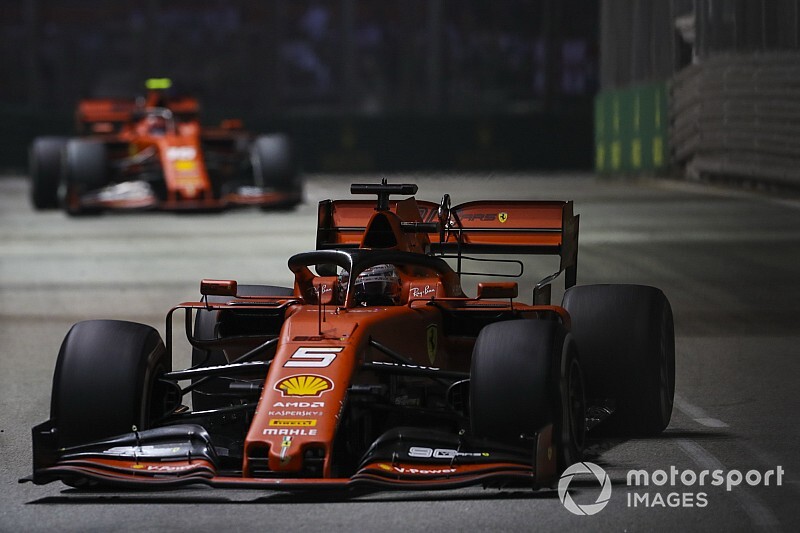 Ferrari thought about swapping Sebastian Vettel and Charles Leclerc in Formula 1's Singapore Grand Prix after being surprised to see Leclerc lose his lead because of the team's strategy.

Leclerc controlled the race from pole position but fell behind Vettel when Ferrari brought the German in to pit first.

Vettel's pace on fresh tyres was so much stronger that he jumped Lewis Hamilton and Leclerc, despite his teammate only pitting one lap later.

Leclerc voiced his displeasure during the grand prix after losing the position on a strategy call, and Ferrari will review its decision not to swap the positions back.

Ferrari team principal Mattia Binotto said: "I understand Charles is a bit disappointed, he was trying his best to win the race and he did whatever he could to win the race.

"Did we consider to swap? Yes, we did. I think we thought that was the right choice not to do it.

"We will still discuss with the drivers whether it was the right choice or not. Internally we may still have a different opinion. We thought about it, but we didn't."

Leclerc eventually finished 2.6s behind Vettel and only 1.2s ahead of Max Verstappen, so orchestrating a swap of positions would have been difficult for Ferrari without risking losing a place to Red Bull.

Ferrari's decision to stop Vettel early, before any of the other frontrunners, lifted the German from third place and turned a one-three into a one-two – Ferrari's first in two years.

Binotto said that while the team "may argue on the swap, I think if it was one-two or two-one, it has been a Ferrari one-two".

When asked by Motorsport.com to explain the intention of Vettel's early stop, Binotto admitted overhauling Hamilton was the target and the effect of the undercut was "more powerful than expected".

"It was 3.9s, we were not expecting such a big number," he said. "As a matter of fact when we stopped Sebastian, we thought that Charles stopping a lap later, he would have remained ahead of Sebastian.

"Sebastian drove well, the undercut has been 3.9s, and that's the fact."

Leclerc was not informed that Vettel had pitted earlier, although Binotto admitted after the race he thought Ferrari had told its driver that, only for Leclerc to politely point out he was in the dark.

Binotto also acknowledged that while the usual policy is to pit the lead driver first, Ferrari was influenced by the slow pace of the early stages of the Singapore race, as none of the frontrunners wanted to stop early and drop into midfield traffic.

"Normally we are always giving the advantage to the car ahead, but in that case [the situation in Singapore] you will not stop Charles first," said Binotto.

"Also, Verstappen was ready to stop. We knew that. And the best way to protect Sebastian's position was to stop him, and make sure he as well that the following laps at least the pitstop crew was free for Charles' pitstop.