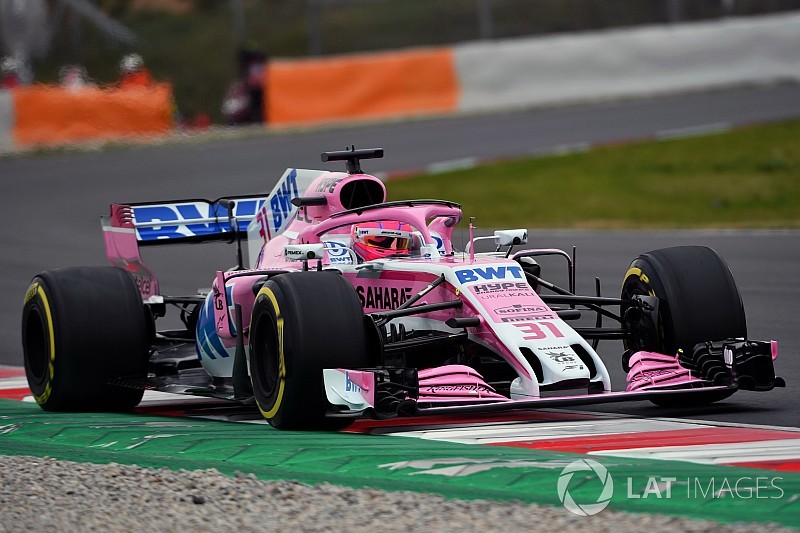 Force India was only the ninth-fastest team in the first Formula 1 pre-season test at Barcelona, and ended up with the fewest laps of all outfits.

Running was severely limited at the Circuit de Catalunya due to poor weather conditions, with the third day of the test almost completely washed out due to snow and heavy rainfall.

Even when cars were out on track, low temperatures meant that the lap times were hardly representative.

As such, Esteban Ocon’s best flyer of 1m21.841s, set on Pirelli’s soft compound, was a poor indicator of how the pecking order will be come Australia.

Ocon set Force India’s fastest time on the second day of the test after taking over the driving duties from development driver Nikita Mazepin.

The Frenchman completed 79 laps in the new VJM11, nearly quadruple the lap count of Mazepin, whose stint was hampered by brake issues.

Sergio Perez was on driving duties during the final day of the test, completing 65 laps and setting a time of 1m21.973s.

In all, the Force India drivers logged a total of 166 laps, with Ocon's time good enough to put the Indian squad ninth in the team-by-team ranking.

Force India’s chief race engineer Tom McCullough admitted that it hasn’t been the “easiest of the weeks” for the Silverstone-based squad, but is confident of completing the team’s testing programme later next week.

“When the circuit was suitable for dry tyres, we fitted a rake ot the car and resumed the aero programme, adding to the data we gathered on Tuesday,” he said.

“We worked through various parameter changes and all the usual tasks for the first week with a new car.

“It’s not been the easiest of the weeks, largely due to the weather, but we are gradually ticking off the jobs on the schedule.

“Next week’s programme will focus on tyre evaluation and performance running.”

Mercedes’ Lewis Hamilton topped the test with an ominous time of 1m19.333s, while Toro Rosso-Honda racked up the most miles, with Brendon Hartley and Pierre Gasly lodging 324 laps between them.

F1 Debrief: All you need to know from Test Day 4