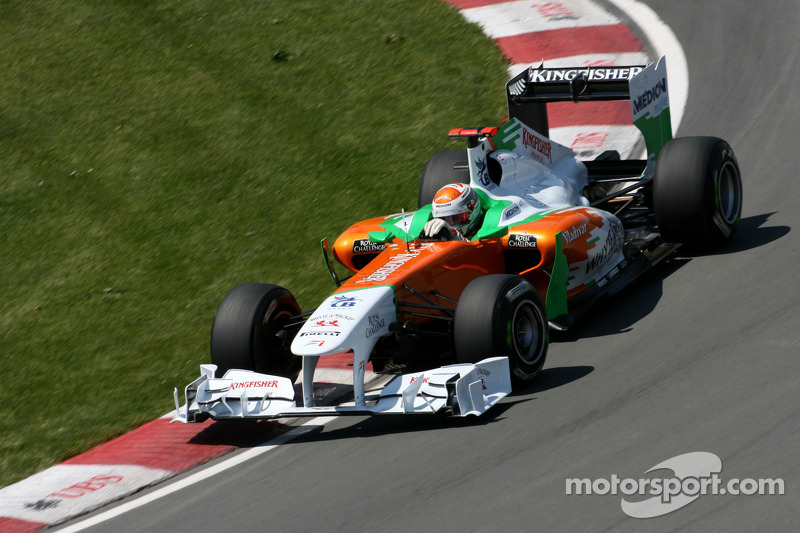 The Canadian Grand Prix was one of those races that we will remember for a long time. It was a day full of drama and excitement and was a great advert for Formula One. Despite the torrential rain showers and delay to the race, the fans still packed the grandstands and showed their support for all the teams. It was fitting that they got to see such a memorable race. 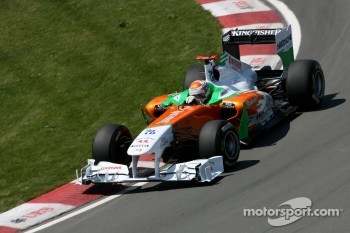 Of course, it was a weekend of unrealised potential for Force India. The luck did not go our way and both drivers were a little over-enthusiastic. This is all part of racing and we will take the disappointment on the chin and come back stronger next time. It was all the more frustrating because the VJM04 was extremely competitive, we had a good strategy and we missed a chance to pick up some big points.

After the low downforce challenge of Montreal, it’s back to high downforce in Valencia. We continue to push hard with the development of the car, mainly on the aero side with several small detailed additions this weekend.

Adrian Sutil hopes for another strong showing in Valencia.

I think we all enjoy visiting Valencia. The city is beautiful and the weather is great, but to be honest the track is not one of my favourites. The lap is made up mainly of straights and hairpins so it’s not the most challenging place to go racing. Although the walls are close, it doesn’t really feel like a street circuit and it’s nowhere close to racing in Monaco.

I have good memories in Valencia, especially from last year’s race. Although we struggled in qualifying, I got lucky in the race with the safety car and made up quite a few positions to finish sixth. It would be great to have another result like that to make up for the disappointment we had in Canada. 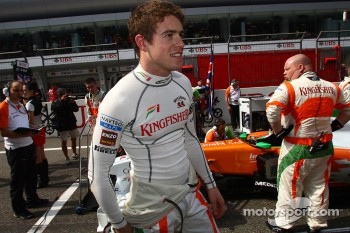 In the past it was always very difficult to overtake in Valencia, even with such long straights. That problem should be solved this year with the DRS available and I expect there to be much more overtaking in the race.

Paul Di Resta gears up for his first race on the streets of the Spanish port.

It’s difficult for me to talk much about Valencia having only done one practice session there last year. What I do remember is that I quite enjoyed the track and it wasn’t too difficult to learn. Although it’s a long lap there are not that many difficult corners and the main characteristic is the long straight.

Because of the long straights I think Valencia is another track where we will see a big advantage with the DRS. That should make some good opportunities for overtaking and it will be interesting to see how the FIA approach this when setting the DRS activation zone so that overtaking doesn’t become too easy. Tyre wear will also be a crucial factor for the weekend because it’s another street track and it’s difficult to predict how the tyres will perform.

In terms of my objectives, I think I’d be fairly happy if we can be pushing to make the top ten in qualifying and racing for points. We saw in Canada that this is a realistic goal and I think the layout of the track should play to the strengths of our car. Hopefully we will have some new parts coming as well so that we can focus on taking another step forward.

Let’s continue our introduction to the team by catching up with Mark Gray, Race Team Operations Manager, who has been with the team since June 2004.

Sum up your job in three words... Busy, challenging, exciting.

First Grand Prix you ever attended? Silverstone 1982 with my father when I was three. I’ve been to every F1 race there since.

Do you have any superstitions? Yes, but the list is too long to bore you with. For example, I always make sure my desk is set out exactly the same wherever I go.

Favourite venue on the calendar? Monaco – yes, it’s a logistical nightmare, but the fans can get close to the cars and it’s an event like no other.

Do you have any hidden talents? I train horses, often wild or problem ones to make them safe to handle and ride. I’m kind of a horse whisperer!

Who would you invite to your fantasy dinner party? The Top Gear presenters would be a good laugh: Jeremy, Richard and James.

How do you switch off from F1? I like to keep busy but I relax by spending time with my son and fiancée on our family farm.

Our team partner, Whyte & Mackay, makers of Scotch whisky, give some survival tips for a week in Valencia

If it’s five star treatment you’re after, then look no further than the Las Arenas Balneano Resort, which was built on the city’s historic thermal spa area and dates back to 1898.

For those on a smaller budget, take a look at Acta del Carmen or Ad Hoc Monumental, which both offer a great mix of old and new city architecture. .

For something a little different, try Cafe Infanta, which combines both a bar and an auction house. Its great cocktails make it popular with the locals and look out for their midnight antiques auction on Wednesdays.

Those who enjoy dancing should visit Johnny Maracas for their ‘salsa’ experience. After dancing you can visit the bar which is known for its excellent Mojitos.

A visit to Spain wouldn’t be complete without some traditional tapas. One of the best places to try is Bodega Montana, which also boasts an excellent wine list.

If you have time, Ca Sento is also worth a visit. Fusing traditional Mediterranean ingredients and new experimental flavours, it’s one of the most popular venues in the city.