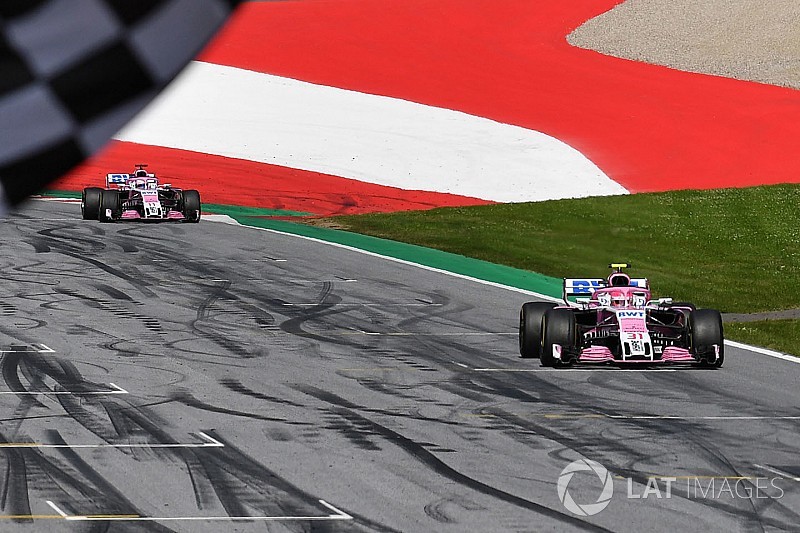 Both Ocon and Perez struggled for pace in the run-up to the race, with neither drivers qualifying inside the top-10 and Perez even failing to progress beyond Q1.

However, the Indian-owned squad capitalised on the retirements of three top-tier drivers to bag 14 points from the weekend.

Starting from 11th on the grid, Ocon pitted under the safety car on lap 15 and managed to nurse his prime tyres for the rest of the race to finish sixth, while Perez, more impressively, rose from 15th to seventh, despite stopping under normal racing conditions.

Perez was allowed to pass Ocon later in the race to catch Kevin Magnussen, but conceded the position back to the Frenchman after he was unable to get past the Haas driver.

“We kept out of trouble in the opening laps and then made some excellent calls from the pit wall to keep Esteban and Sergio in contention for points.

“To score 14 points from a weekend where we didn’t optimise our Friday and Saturday sessions helps make today’s performance more satisfying and is a nice way to celebrate our 200th race as Force India.”

Perez, who scored his first points finish since May’s Spanish GP added: “We have come away with important points from a weekend that was quite challenging in the lead up to the race.

“Starting from P15 on the grid and finishing seventh is a great effort and we should be proud of this achievement.

“Yes, there were some cars that retired ahead of us, but we raced well and made our strategy work so that we could take advantage of these opportunities.

“We didn’t pit under the Virtual Safety Car, like many others did, but the strategy we chose worked really well and I had strong pace all afternoon, especially in the closing laps.

From the editor, also see:

Despite both cars finishing inside the points, Force India slipped to seventh in the standings as Haas jumped up to fifth position.

Ocon feels Force India must continue to develop its car to keep up-to-pace in the tight fight for midfield honours.

“Hopefully the next updates will keep bringing performance to the car and we can keep the momentum going,” he said.

“The championship battle in the midfield is going to be very close until the end of the season and we need to keep pushing.”

How Mercedes outdid its own Armageddon