Force India tied on points with Haas after Germany double 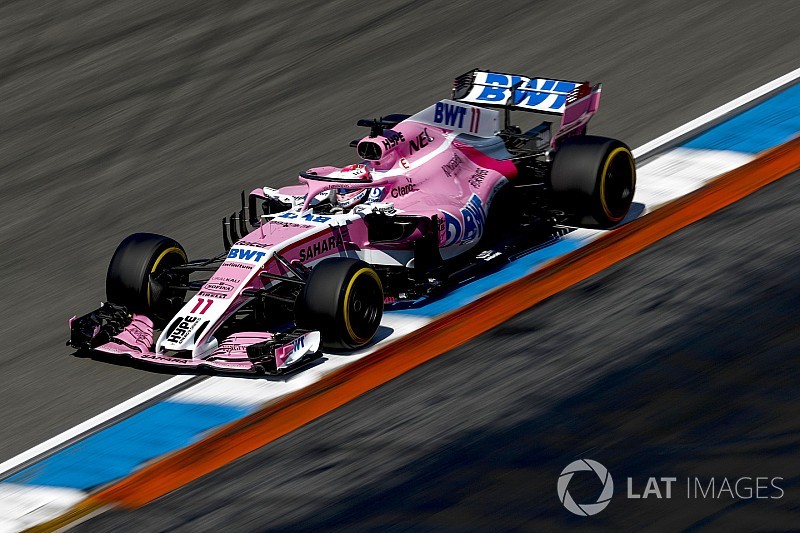 Force India is now tied with Haas in the Formula 1 constructors’ standings after its third consecutive double points finish of the season in Germany.

Force India’s strategic decision of not pitting under the late-race safety car paid off, allowing Sergio Perez and Esteban Ocon to finish seventh and eighth respectively at Hockenheim.

Haas driver Romain Grosjean actually finished ahead of Force Indias in sixth after overtaking both Perez and Ocon on fresher tyres, but with Grosjean’s teammate Kevin Magnussen classified outside the top 10, Force India managed to outscore the American team by two points.

This allowed Force India to come level on points with Haas, although the Indian outfit gets to sit higher up in fifth position in the standings thanks to the podium finish achieved by Perez in Azerbaijan.

At Hockenheim, the Mexican driver had a slow pit stop and then lost more time after spinning in tricky wet conditions, but he managed to make the strategy work to score a decent hault of points.

“When you come away from such a crazy afternoon with some good points you have to be happy,” he said.

“The whole race was very busy and I was always in the middle of the pack fighting the cars around me. I had a mega first stint, but we were unlucky with the slow pit stop, which cost us a few seconds.

“Then, when the rain arrived, it was very tricky and each lap was a new adventure. I spun while I was lapping Leclerc – I don’t think he saw me and I just lost the rear end.

“To survive all these things and finish seventh is a good achievement. It’s just a shame I lost a position to Grosjean on the final lap, but we did all we could today.”

Ocon started the race down in 15th position after failing to progress beyond the first part of qualifying on Saturday, but make major in-roads to finish just behind his teammate in eighth.

“It’s a great result for us after yesterday’s disappointment. I made a good start and gained a few places in the opening laps, but besides that the first stint was pretty boring.

“It’s only after the pit stop, when it started raining, that Sergio and I truly made the difference. We gained a few positions on slicks under the rain and it was really good fun.

“I had to evaluate the situation lap by lap, based on how much rain I could see on my visor and picking my braking points accordingly, but we never really had any doubt about staying out.

“To get in the points after a tough Saturday is a great result: we stayed solid, we believed in our strategy and in the end it paid off.”

With 10 races to go, Force India has its sights on fourth position in the constructors' standings and needs to outscore Renault by 21 points to achieve that feat.