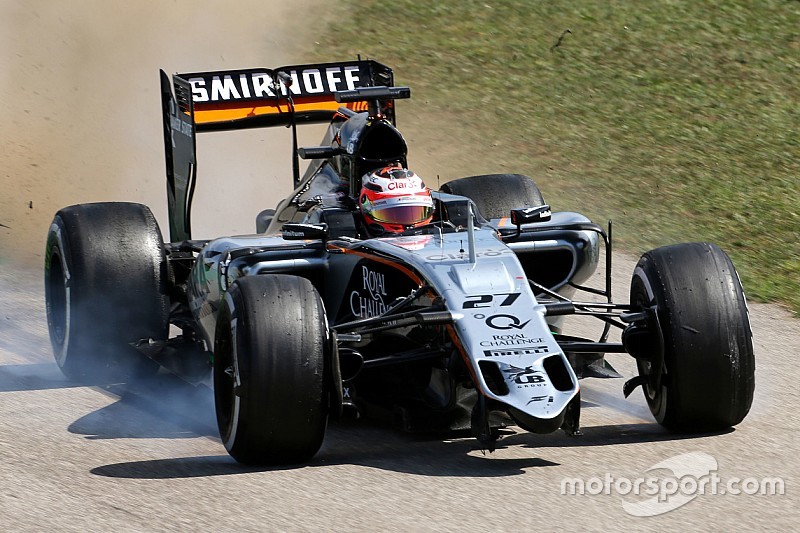 Force India enters the summer break with a second investigation into a failure on its hands after Nico Hulkenberg lost his front wing in the Hungarian Grand Prix.

Hulkenberg’s wing came adrift of its mountings late on in the race at the Hungaroring, causing the German to crash heavily at Turn 1 and ultimately bringing out a Safety Car to clear the debris.

The issue came after Sergio Perez suffered a rear wishbone failure during first practice Friday, causing the Mexican to roll spectacularly, something the team attributed to a frequency set up by running over the kerbs.

Although the same spec of wing ran without problem at Silverstone, the wing on Hulkenberg's car was actually a new item, thus with low mileage on it.

The task of fixing the problems and preparing new parts is however complicated by the mandatory factory shutdown during the first two weeks of the summer break.

“We're looking into it and I'm confident and we'll find it and fix it,” COO Otmar Szafnauer told Motorsport.com. “Reliability is one of our strengths, so I think we'll get there quickly.

“The issues could be related; it could have translated into this as well. The front wing ran at Silverstone, and we had new wings here, so it has to be something track specific.”

Meanwhile, Perez failed to see the flag after a collision with Pastor Maldonado compromised his pace. He also had to take a new front wing as a precautionary measure.

“Sergio was having a great race until he overtook Maldonado, who gave him no room. When he spun he did a lot of damage to the floor, so aerodynamically it wasn't optimal.

“And then we changed his wing for precautionary reasons as well, which meant a long pit stop. Then he started having a long pedal, and we thought if there are any brake issues, we'll bring him in.”

Szafnauer agreed that a shot at a podium for Hulkenberg had been lost because of the wing failure: “It was frustrating, because the pace of the car was very promising.

“We were ahead of Kvyat until that, and this is one of Red Bull's stronger tracks, and for us to be able to fight with them bodes well for the future.

“I think that the package has some promise for Spa. I'm optimistic.”

Rosberg: Hamilton focus not to blame for defeat