Ferrari seriously considering a switch from Formula One to WEC?

In an interview earlier this week with the Wall Street Journal, Luca Di Montezemolo was quoted as saying, "Formula One isn't working."

There has been a lot of chatter that they are on the verge of unveiling a new LMP1 project and those rumors are only being intensified with Fernando Alonso serving as the honorary starter for Le Mans Saturday. Montezemolo served as the honorary starter himself back in 2009, which was not-so coincidentally, the same time he and the FIA were butting heads over team budget caps.

Di Montezemolo was very animated in the interview and upset with the direction Formula One is going. He feels that FIA is more concerned with efficiency than they are excitement, which he cites as the reason for the decline in TV ratings. 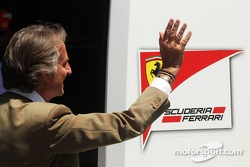 I'm sure the struggles of the Ferrari team in the 'new' F1 is part of the reason why he is so frustrated too. He also mentioned his discontent with the rules forbidding any kind of engine development during the season. This may not be happening in the very near future however with Montezemolo throwing out the year 2020 during the conversation.

This isn't the first time Montezemolo has expressed interest in a return to the pinnacle of sports car racing either. It was rumored that they would reveal plans for a new LMP1 program during the annual ACO press conference Saturday. They have suddenly decided to postpone the mysterious announcement to a later, TBD date.