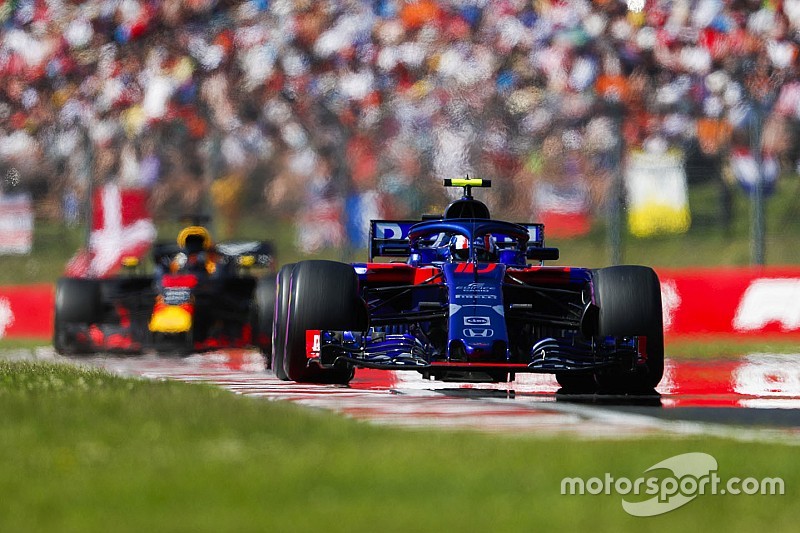 Pierre Gasly believes the driveability of Honda’s 2018 Formula 1 engine is “more consistent” than he experienced with Renault at the end of last season.

Gasly made his debut with Toro Rosso in the final few races of 2017, when the team used Renault engines, and his first full season in F1 has coincided with the Red Bull junior team’s switch to Honda.

The Frenchman went into F1's summer break after qualifying sixth in Hungary, in a wet qualifying session, and finishing in the same position in hot and dry conditions on race day.

He said that while Honda is still making progress in reducing its power deficit to its rival manufacturers, the engine has other strong points already.

“On the driveability side since the beginning of the year, I think it's pretty good and more consistent compared to what we had with Renault last year,” he said. “It's more on the throttle and the torque you get from the engine.

Gasly said the Honda’s power curve made it good when you need to be “at the limit of traction”, like in the wet qualifying session at the Hungaroring.

Honda’s F1 technical director Toyoharu Tanabe told Motorsport.com it was very difficult to evaluate the part the engine played in the laptime.

He said: “Honda trackside support thinks the driveability is one of the priority. They are developing it on the Sakura side, we have it here in the real world where the driver is our customer.

“Driveability is the communication between the power unit and the driver, so we need to improve that area and it’s very important for us.”

After a run of races on power-sensitive tracks that exposed the extent of Honda’s peak performance deficit to Ferrari, Mercedes and Renault, the weekend in Budapest was overwhelmingly positive for the Japanese manufacturer.

“We knew that it's a track that's a bit less power-sensitive, and in a way could make things a bit closer between everyone,” said Gasly.

“But Honda did a fantastic job in qualifying in the wet conditions, the driveability was great, and then we didn't have any issues at all [in the race, held in 30 degree ambient temperature].

“It's the best way to motivate them and to show them that we have potential to push them forward, especially just before the summer break, to give a big boost to everyone and hopefully get more performance on their side for the second part of the season.”

The Mercedes force of nature on the path to F1