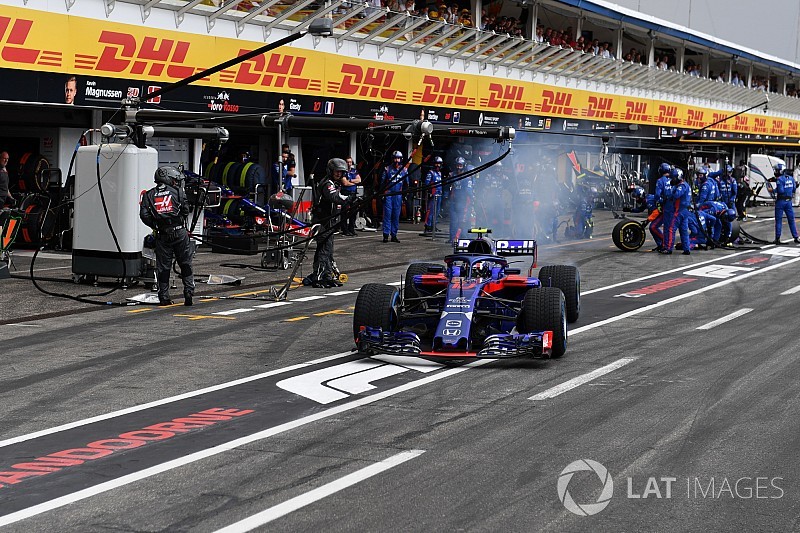 Gasly followed fellow midfield runners Charles Leclerc and Fernando Alonso into the pits when rain began to fall at sections of the Hockenheim circuit on lap 44 of 67.

But while his two rivals headed back out on intermediates, Gasly's STR13 was equipped with the blue-walled full wet Pirelli compound.

The gamble did not work out, as Gasly struggled to remain on the mostly dry track surface, and by the time he switched back to slicks three laps later, he had lost over a minute.

Speaking after the race, Gasly – who was the only driver to run the wet compound – explained that the unorthodox tyre call was not his decision, and even caught him by surprise.

"At that time they asked me my opinion," Gasly recalled. "I told them the rain is still pretty light, and they asked me to pit, but I didn't really expect them to put the wet.

"They put them on and then I was like 'yeah, okay, let's try', they have the [weather] radar and I didn't have it, of course you don't have this information in the car.

"I was like 'yeah, okay, probably it's going to work out' and then I did three corners and I was like 'okay, either it [the rain] comes now and then we have a chance, or we're dead'.

"And then [I] stayed out for three laps. The tyres were completely overheating, it was impossible."

Gasly's brief stint on the wet tyres included a lengthy trip through the gravel on exit of the Turn 12 right-hander.

"I couldn't even believe how slippery it was out there with the wet, on the dry it was sliding everywhere," added the Frenchman.

"Basically less grip than in the two litres [Formula Renault], even in the straight I could not put the power down, I was spinning everywhere, and sideways in the every corner.

"I think a couple of guys did also have a mistakes even with the inters. With the wet was really really tricky."

Still, Gasly maintained that the strategy gamble "made sense to try", as he'd been running 15th when the rain arrived.

"We were not in a really good position at the time," he added. "They [Toro Rosso] were like, the gain if it works would have been much bigger than just trying to stick on the same strategy than the others.

"That's why we tried it, hoping for more rain and score big points but at the end it didn't work."