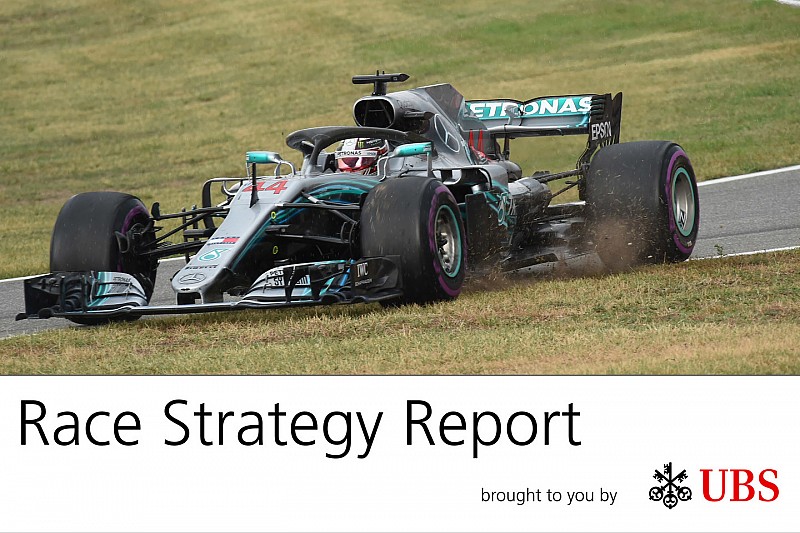 James Allen analyses the German Grand Prix, as a rain shower, a crash and pitstops under the safety car turned the Formula 1 World Championship fight on its head after an already-dramatic qualifying.

Formula 1 is a sport where fine margins make the difference and some Grands Prix really highlight that. Hockenheim was one of them.

It was the tiniest of rear-wheel lockups for Sebastian Vettel on a damp track that caused him to crash out of the lead. It was a split-second decision by Lewis Hamilton to stay out, when he’d been called into the pitlane, that won him the race.

And it was a finely-balanced call to fit ultrasoft tyres on Hamilton’s car as a rain shower approached that set him up for the win. 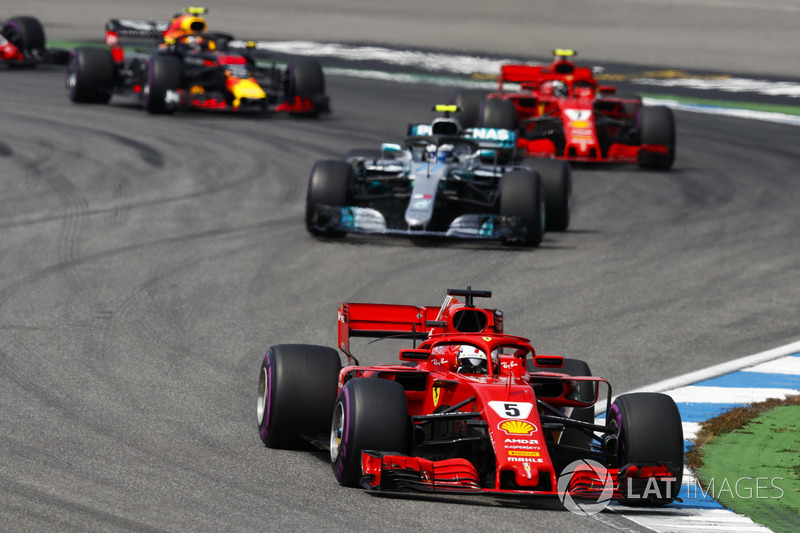 Ferrari enjoyed a two-versus-one situation at the front in the early stages, with Valtteri Bottas’s Mercedes alone at the front against Sebastian Vettel and Kimi Raikkonen, after Lewis Hamilton started down in 14th  place.

Following hydraulic problems in qualifying it meant that, starting outside the top 10, Hamilton had the option to start on soft tyres, allowing him to wait and see what happened with the rain and then use new ultrasofts to the finish of the race.

The first noteworthy decision in the race was Lap 14, when Ferrari tried to use Raikkonen to pull Bottas into an early pit stop, which would not be the optimum in a dry race and would give Vettel more breathing space. 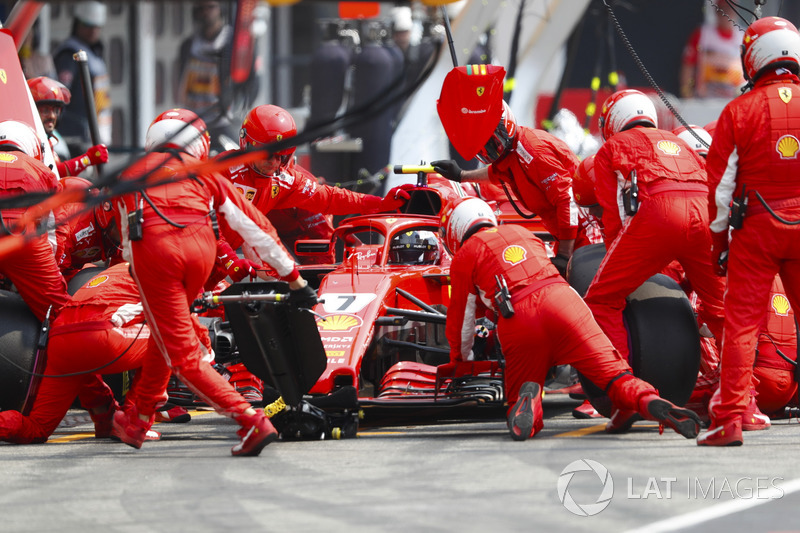 But Mercedes didn’t bite, as it was trying to get the ultrasofts to last to the point where the rain might mean a switch to intermediates. Mercedes was also confident that Hamilton would enter the picture later in the race, if the threatened rain came – and even if it didn’t, as there was a real question mark over managing the distance on a one-stop strategy starting on ultrasoft tyres; blistering was a real issue on a hot, dry track.

There was another reason why Ferrari pulled Raikkonen in on Lap 14: to cover Hamilton, who was advancing through the field. This move brought the #7 Ferrari out in front of the #44 Mercedes. As Raikkonen had a fast car on fresher tyres, he inevitably pulled away from Hamilton early in his second stint. 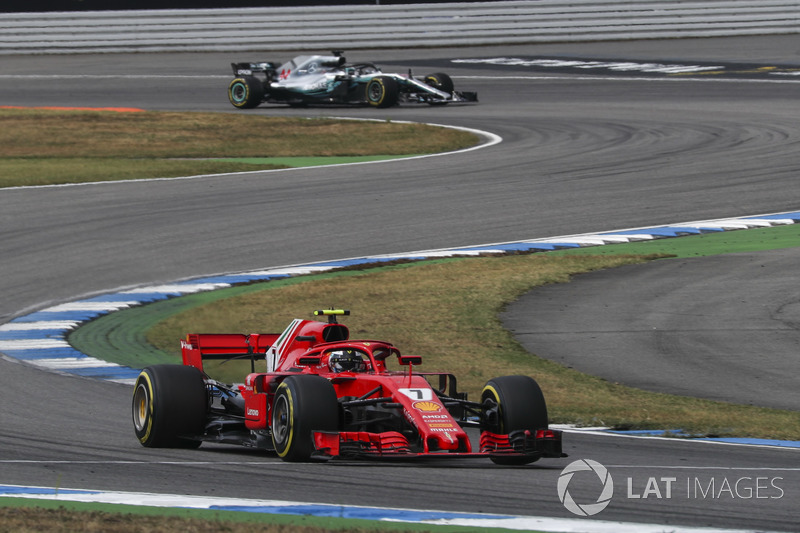 Kimi managed to get within Bottas’s pit window and, by not holding Hamilton up, it meant that he too was progressing quickly.

But, in dry conditions, it was highly unlikely that even Raikkonen with his fantastic tyre management skills would have managed to reach the finish without stopping again. He was committed to a two-stop strategy.

And that is the third reason why Ferrari pitted early, because no-one was really sure about anything: whether it would rain and if so how much, or whether in a hot, dry race with tyre blistering a one-stop or two would be the optimum strategy.

So by splitting strategies Ferrari thought it was in the best possible situation for winning. 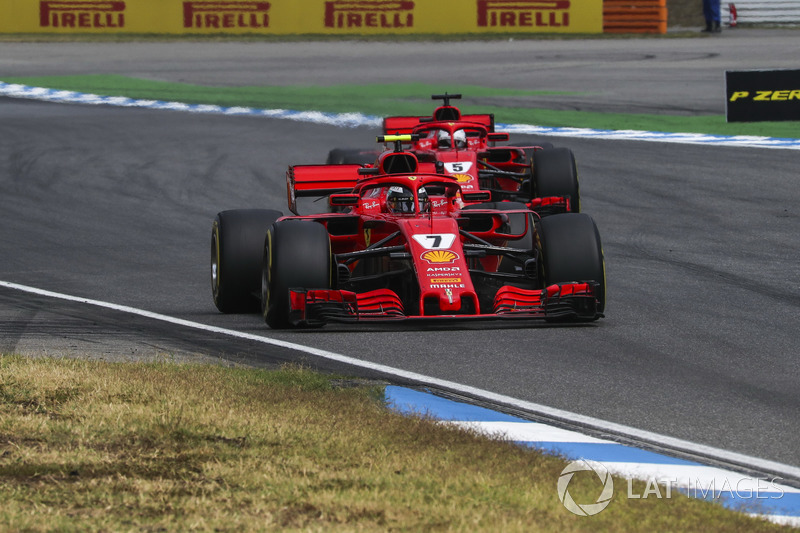 Having played a team game with Raikkonen on the first stop, Ferrari then took a different approach when Vettel stopped on Lap 25. He came out behind Raikkonen, but on 11-lap fresher tyres and a different strategy.

This presented something of a conflict: with rain expected, neither driver wanted to be the one running second on the road as it would mean having to wait in a queue at the pitstop for service on wet tyres, losing time and track positions.

It also meant for Vettel that he would lose the impact of the new tyres in getting a gap to the Mercedes pair, and by sitting in the slipstream behind Raikkonen he took more life out of them, as we have seen many times before.

“This is getting silly,” he told the team on the radio. “Don’t you see the tyre temperatures. What are you waiting for?”

It’s worth recalling that as recently as the French GP, Vettel, on worn tyres, was instructed to let Raikkonen through on fresher tyres in the closing stages and the Finn caught and passed Ricciardo in the final laps of the race for a podium finish. It’s a team game, after all.

This situation lasted until Lap 39 when Ferrari, under pressure from Vettel, asked Raikkonen in the clear terms that he had requested to let Vettel through. 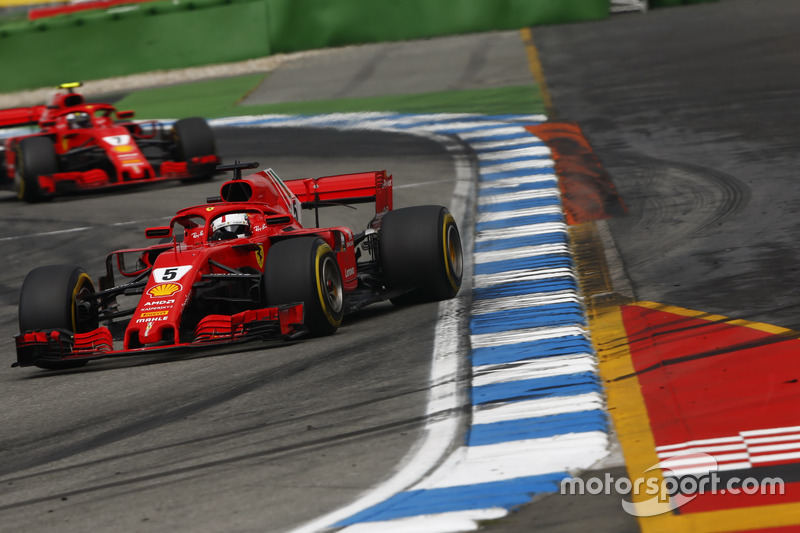 Having started the sequence of pitstops by putting pressure on the one-car Mercedes challenge at the front, Ferrari now found the tables turned as Merc now had both cars in play – and it piled the pressure on.

By starting on soft tyres, Hamilton had much more flexibility on his strategy because he could run longer to the point where the weather situation became slightly clearer. As he reported that there was maybe a lap or two left in his tyres, Mercedes had the information that there would be a short, intense shower, which would hit Turn 6 and probably not spread much further down the track.

This gave the team the idea that they should stick with the original plan, which was to pit Hamilton for ultrasoft tyres, as they would have done in a fully dry race. The ultrasoft would have better traction on a slippery track than the worn soft tyres being used by the Ferraris, Max Verstappen’s Red Bull and Bottas – in the event that it was just a short shower. 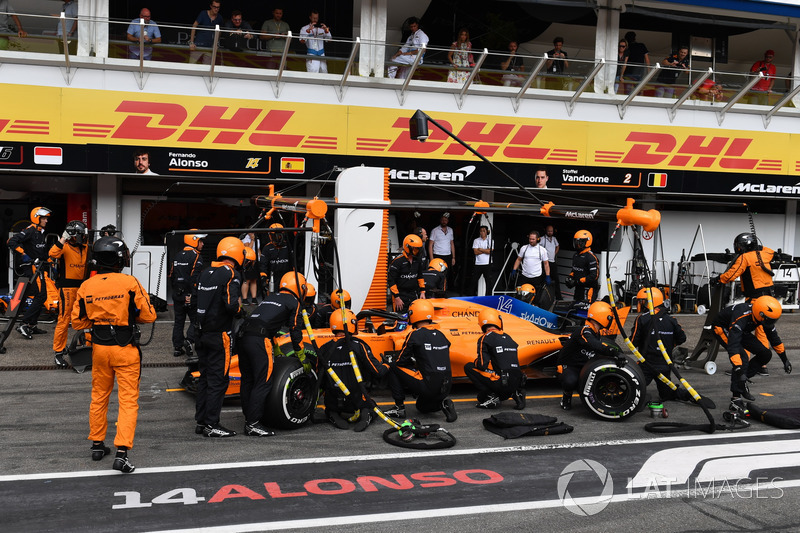 Sauber, McLaren and Red Bull all went for intermediates when the shower hit, but it turned out to be the wrong call and Charles Leclerc, Fernando Alonso and Verstappen were soon pitting again to switch back to slicks from their overheated intermediates.

The rain fell in two instalments, the second more challenging than the first. The lap times drifted off, but notably Hamilton – on new ultrasofts – had been able to take two seconds a lap out of Vettel and Raikkonen on their worn softs.

Vettel’s accident, when it came, looked innocuous enough and it would be a stretch to suggest that he crashed because of the pressure that was being applied by Hamilton as the tables turned in the adverse conditions. Just as it would be to suggest that the situation had been compounded by the time – and the additional tyre damage – that sitting behind Raikkonen had caused. 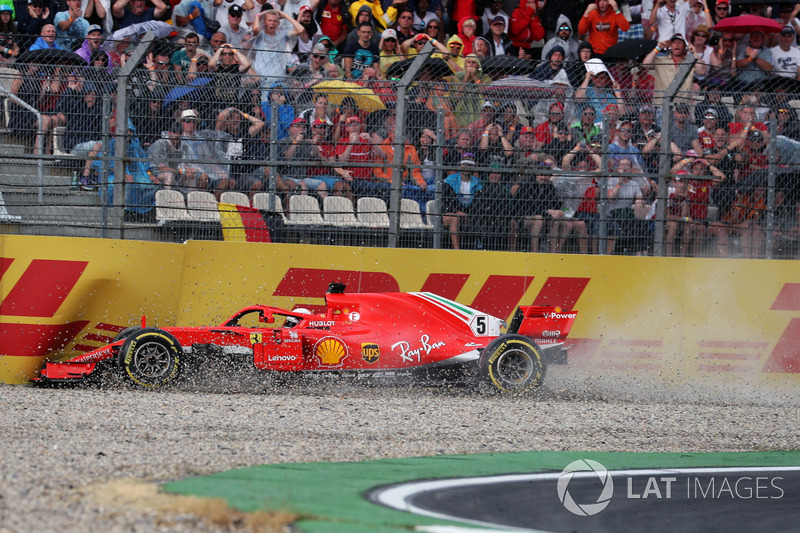 Sebastian Vettel, Ferrari SF71H crashes out of the race

But it would be accurate to say that once Hamilton had jumped onto ultrasofts on a damp track and eaten into his lead at two seconds per lap, Vettel was in a position where he could not stop again without losing the race.

And possibly, as in Singapore last year, he was aware that when the conditions change with rain, Hamilton’s threat becomes greater and that requires a response.

Mercedes was far from serene in this phase of the race as it lost time with Bottas’s second stop, due to not having the right tyres to fit and, while he was sitting there, they had a miscommunication with Hamilton that ended up being reviewed by the stewards as he backed out of the pit entry at the last minute.

This was all around staying out relative to Raikkonen, who pitted a lap later which put him behind Bottas.

Hamilton’s last-minute jink to the left, and across the grass, effectively won him the race. He would have lost time behind Bottas, even under a Safety Car, and with his teammate with fresher tyres and track position, the Finn would have won the race. 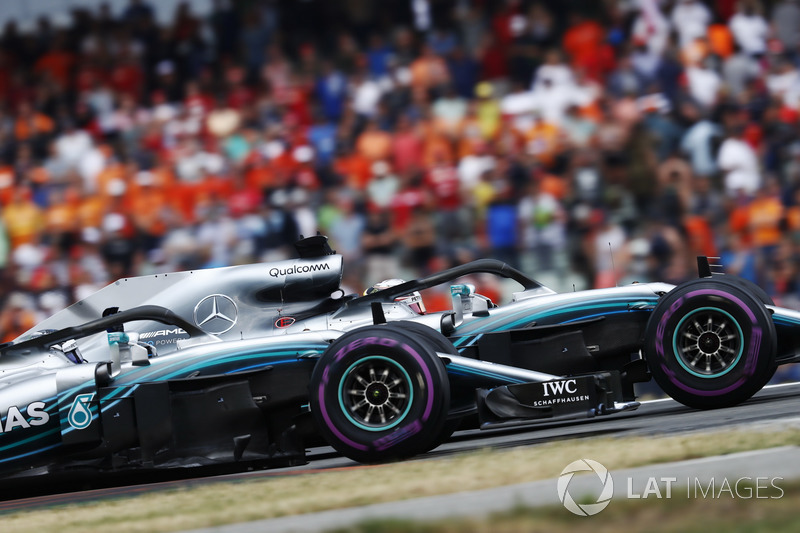 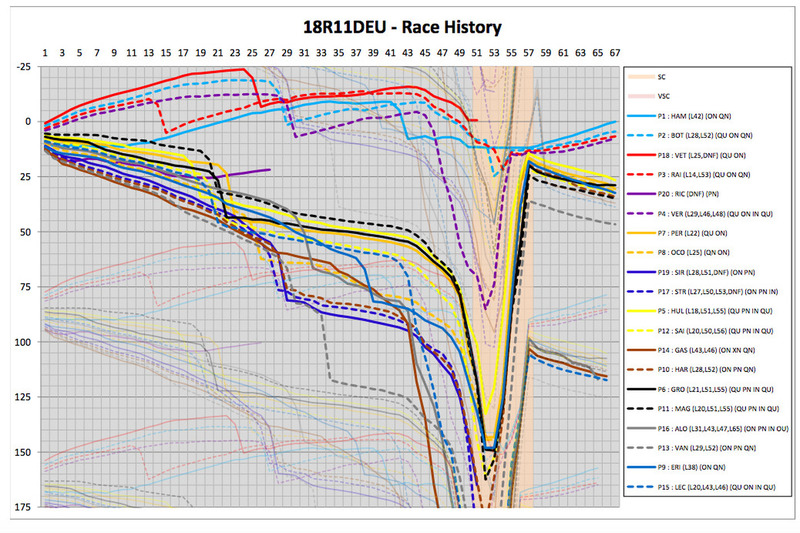 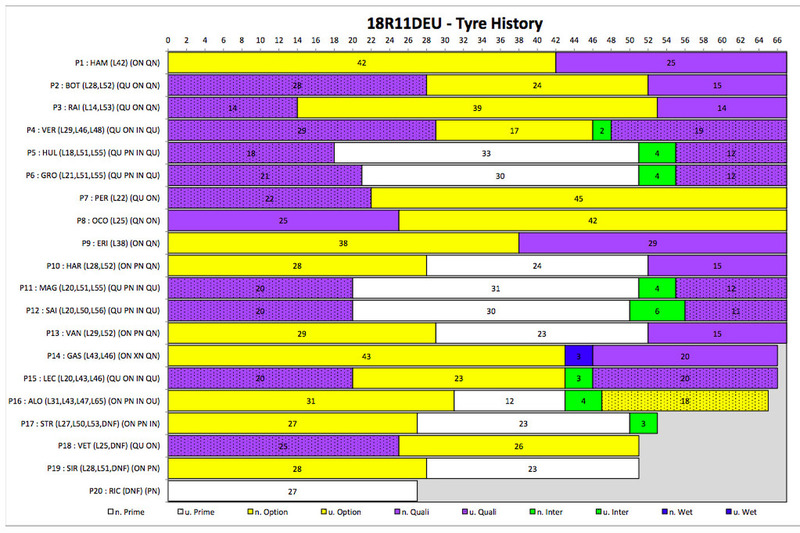