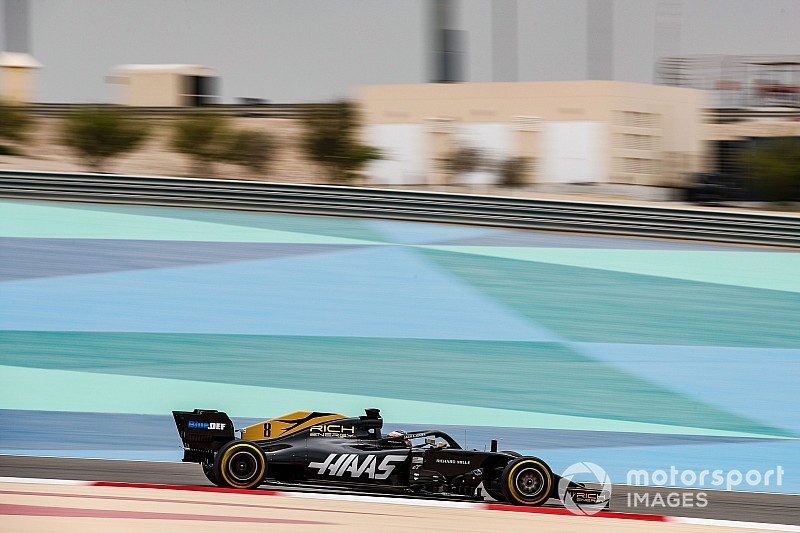 Grosjean, whose team bemoaned a “hopeless” race on Sunday, topped the times early on Tuesday at the Sakhir circuit.

After hitting the front in the opening hour he improved to a 1m30.982s by the time the first of two rain showers hit the track.

The drivers scurried back to the pits after two and a half hours of running, but teams kept sent them back out – on slicks – within half an hour as the rain passed and the track remained barely affected.

This gave the teams chance to crack on and several drivers set faster times, including Schumacher.

The reigning European Formula 3 champion, son of seven-time F1 world champion Michael Schumacher, featured little before rain first came down, completing 15 laps in the first two and a half hours of the test.

He more than doubled that tally in the next hour though, rising to eighth in the times on a 1m32.552s and pausing for lunch with 33 laps to his name.

There is no formal lunch break in the day’s running but a second, heavier downpour paused the teams’ respective programmes not long after midday local time.

As well as limiting Schumacher’s running in his first F1 test, the rain will be an unwelcome problem for the likes of McLaren returnee Fernando Alonso – seeking to learn about the team’s 2019 car while completing Pirelli’s tyre test programme – and Daniel Ricciardo, who had hoped to use the test to become more comfortable in his new Renault.

Toro Rosso driver Alex Albon was second-fastest when the rain came, on a 1m31.089s set in the third hour.

Red Bull’s Max Verstappen made a slight improvement to a 1m31.319s in between the showers.

The biggest improver was Carlos Sainzr Jr. Sainz, who had a disappointing grand prix in which he clashed with Verstappen and then retired with a gearbox problem, found a second to go fourth quickest on a 1m32.059s.

The test is due to run until 6pm local time but teams still had not resumed running with less than three hours to go.

Perez: Bahrain GP should be "the bottom" for Racing Point