Grosjean "gutted" not to have Haas update for home race 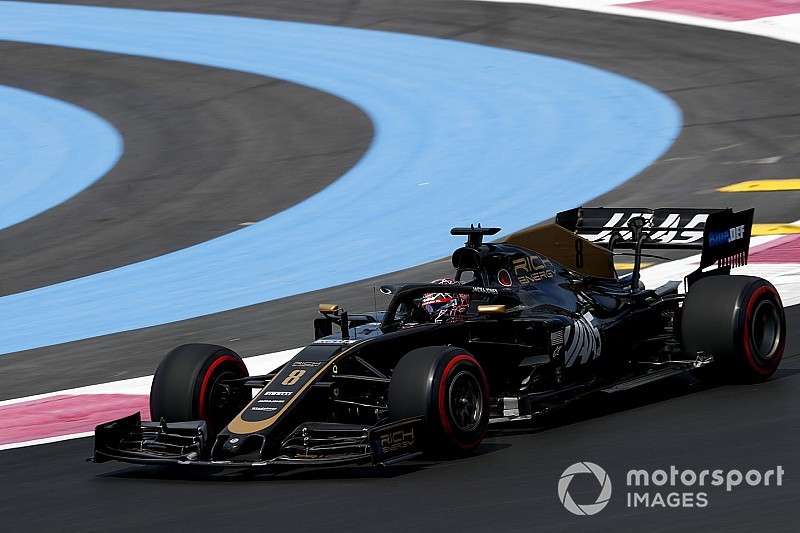 Haas Formula 1 driver Romain Grosjean says he is “a bit gutted” that the new rear suspension is available to Kevin Magnussen rather than him for his home race in France.

Grosjean is set to share the eighth row of the grid with Magnussen for Sunday's race, but was almost half a second slower in Q1, from which only Magnussen advanced for Haas.

The Frenchman, who previously estimated he might not have the updated suspension on his VF-19 until after the summer break, said he was “paying a heavy price” for this discrepancy between the two Haas cars at Paul Ricard.

“I'm a bit gutted that I don't have it for my home race,” Grosjean said. “I think it's a massive gain here - so, already the car is not fast, but when you don't have it, it just makes it harder.”

Grosjean had a disrupted run through Friday practice, and lost control of his VF-19 through the Turn 8/9 chicane on his final push lap in the first qualifying segment.

However, the Frenchman was not convinced that the lap would've been enough to make it out of Q1 either way, with the car “difficult to drive”.

“I think just the pace wasn't quite there,” he said. “When I crossed the line on the first push lap, I thought, 'you know what, that's about what I've got in the car'. Second lap was maybe a tenth up, but then in Turn 9 the rear end went.

“I didn't do anything different from the previous lap, so the car is very on the edge of going, either the front or the rear is always quite difficult.”

Teammate Magnussen had been 12th in Q1, but was then slower in Q2, which left him bottom of the times by seven tenths.

“The wind swapped around [in Q2] and picked up and I made mistakes on both my laps because of that wind change,” he said.

“We seemed to struggle a bit more than others, but, you know, it doesn't explain why we are not as competitive in qualifying as usual.”

Team boss Gunther Steiner was confounded by the swings in the VF-19's performance at Paul Ricard, describing this as “just a mystery”.

“The whole weekend was weird. If you look into the sessions all of a sudden, one team goes up to fifth best and then comes down again,” he said.

“It’s all over the place and we don’t understand it, if I knew what was happening we could fix it but we don’t know what we need to fix and that is what we are discussing at the moment.

“What is actually going wrong here? If that was an easy answer, the thing is if it was only yourself to look at but look at everyone else - they must be confused as well because the swings are quite dramatic and if we don’t understand, then I don’t think the others will do.

“[But] I don’t want to speak for the other teams, I have enough to do with my team.”