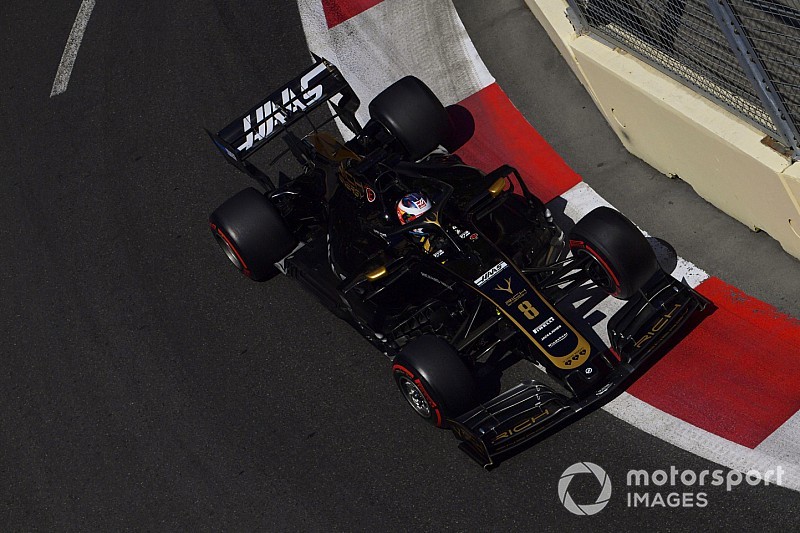 Kevin Magnussen and Romain Grosjean found themselves struggling for grip and pace in Baku, despite both reporting that they were happy with the feeling of the Haas Formula 1 car.

The drivers finished qualifying in 14th and 17th places respectively, although both will gain grid positions from penalties incurred by others.

Team boss Gunther Steiner had cautioned in advance that Baku would be a difficult track for the team, and that proved to be the case as the drivers couldn’t get into the tyre temperature window.

“The feeling hasn’t been good all weekend in the car,” said Grosjean. “But it came back in qualifying with the set-up, so I’m surprised to see the lap time was missing.

“We need to analyse everything, the grip wasn’t quite there but as I said, the feeling was there and I’m usually quite good at putting the brain on the side and going for it in qualifying. It just didn’t work today.”

“I’m reasonably happy with the car,” added Magnussen. “I guess it’s just a question of overall grip rather than feeling in the car. Yes, I agree with him [Grosjean] that the car feels okay, but we’re not fast enough because the grip level is too low for us.”

Steiner insisted that he was not too disappointed by Grosjean’s failure to progress from Q1.

“I think that Romain never got the confidence in the car,” he said. “It’s better not to do anything stupid here, because you know how quick it goes here.

“I think he was quite smart not overdo it, risking too much, if you don’t have a good feeling for the car. And Kevin did a good job for what he had. Here we are, we start 13th and 15th, which is not fantastic, but not the end of the world.

“They both have a decent feeling going around, but the time isn’t there. Kevin said it was fine, but I expected a much better time, it wasn’t there.”

Steiner said the team is still struggling to understand Pirelli's 2019 tyres, but he stressed that Haas is not the only outfit searching for answers.

“I think we know our problem, we can’t get the tyres to work in low temperatures and on low energy track. I told everybody after China that this would be a challenging weekend for us. I’m not too surprised.

“We knew it would be hard here, but we’re not the only ones who struggled. It means that we’re not dumb, it’s just a very difficult task. A lot of our competitors, some are up, which normally are not up, and some are down like us, which are normally up with us. I didn’t really follow the front, Ferrari and Mercedes, but there I think it was back and forward all the time, between the sessions, depending on temperatures.

“We’re all doing some guesswork, as much as I think we are smart here. If somebody tells me they have figured out completely how to manage the tyres, I welcome him to explain it to us. I’m not trying to be critical, it is what it is. Some people maybe deal better with it, but maybe they cannot deal with it at different tracks, we don’t know yet.”