The Haas Formula 1 team still has "the best baseline" in the championship's midfield despite scoring zero points in the past three races, according to driver Romain Grosjean. 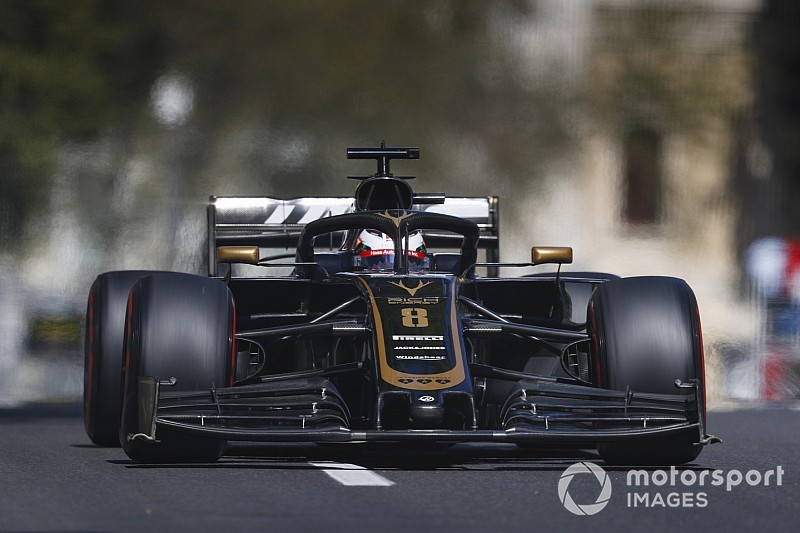 Haas has largely failed to convert regular Q3 appearances into points in the early races of 2019, with the team's VF-19 blighted by tyre warm-up issues.

The new car's weaknesses were particularly exposed last time out in Azerbaijan, where both Grosjean and teammate Kevin Magnussen came nowhere near challenging for the top 10.

Grosjean described Haas' Baku travails as "unsurprising but f***ing annoying", but stressed he still believes the VF-19 is a good car.

"The baseline of the car is still the best in the midfield, to be fair," he said. "I believe downforce and so on is there, but if you can't get the tyres to work, whatever you have it doesn't seem to be working.

"I'll be in the simulator next week. I'm going to try the update for Barcelona. It's quite a big one and hopefully it helps. But if we don't get the tyres in the window it's just pointless.

"I don't think it's downforce[-related] because I believe we have more downforce than some other cars in the midfield, and they can run the tyres, so it has to be somewhere else."

The Renault works team, Haas' main rival for 'best of the rest' honours behind the leading F1 teams over the last season and a bit, joined the American outfit in struggling for form in Baku, as both squads were relegated towards the back of F1's midfield pack.

Renault and Haas are now seventh and eighth in the constructors' standings, trailing the likes of McLaren, Racing Point and Alfa Romeo.

Asked by Motorsport.com whether Renault's poor Azerbaijan showing was a silver lining amid Haas' own struggles, its team boss Gunther Steiner said: "I mean, it the moment it's still very close in the midfield because everybody is suffering the same problem one day or another. There is nobody which is completely in control of what we need to do.

"But each race, it's 'oh they just gained a few points on us' - a few points after a while is a lot. So you need to be careful, you cannot be too positive about it.

"It's not a positive. But I mean, Renault will be scratching their heads as well as we do. We have got the fastest cars [in the midfield] but we are now at the back."