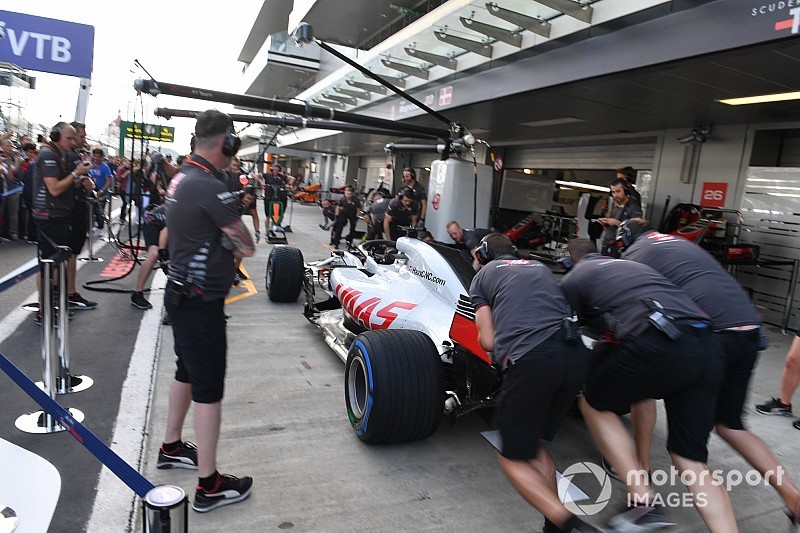 The Haas F1 team has asked the FIA for two sets of replacement tyres after they were damaged in an overnight fire in the team's garage in Russia.

The fire is believed to have begun in the control box for a set of tyre blankets, in effect destroying the tyres that the blankets contained and also damaging a second neighbouring set, both of which were allocated to Kevin Magnussen.

The team made a formal request to the FIA to be granted replacement sets this morning.

The fire was spotted by a night security guard and extinguished by guards from various teams before it could spread.

Team boss Gunther Steiner admits that the outfit had a "lucky escape" after the fire was quickly extinguished.

"We don't know what happened yet, because it's all burned," Steiner told Motorsport.com.

"And we cannot jump to a conclusion. I don't want to put any panic on to what actually happened, because we don't know.

"I think one security guard saw it, and then they all worked together to extinguish it.

"A lucky escape, and it's good that they worked together and caught it, because if tyres go on fire they are difficult to extinguish."

One rival team has questioned whether the blankets were turned up overnight, which is not the accepted practice, suggesting that an advantage could be gained by curing the tyres.

The prescriptions from Pirelli which are enforced by the FIA say that tyres can be kept at a "storage" temperature of 60 degrees Celsius, before being heated to 80 degrees for two hours, and then finally boosted to 110 degrees in the last hour before the session.

However, Steiner denies that the blankets were turned up.

"Now we'll have to unplug them at night. What they do normally is just come in in the morning and switch them on, everything is cabled up."