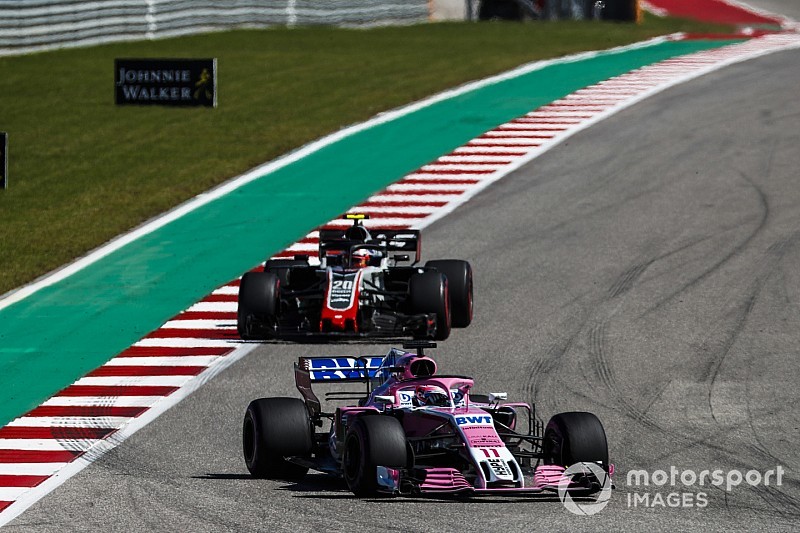 The hearing into Haas's protest of both Racing Point Force India Formula 1 entries has been paused ahead of Abu Dhabi Grand Prix Friday practice to examine additional evidence.

Haas and Force India representatives appeared before the stewards on Friday morning in Abu Dhabi after Haas lodged a protest over its rival.

It is understood to pertain to the Racing Point Force India entry running a design built by the original Force India entity that fell into administration over the summer.

The hearing began at 11am local time on Friday but has been adjourned until 3.40pm, just over an hour after FP1 finishes.

A stewards notice said this was to "allow for the examination of additional documents submitted in evidence".

Force India fell into administration over the summer and accepted by the FIA as a new entry, Racing Point Force India.

The new team has continued to use the VJM11 designed and built by the original entry.

F1 regulations state all entries must own the intellectual property rights to their design.

Haas and Force India are not rivals for position in the constructors' championship as Haas is fifth on 90 points and Force India seventh, on 48, after losing its results from the first half of the season.

However, Haas has opposed Force India's eligibility for prize money since the team became a new entry owned by a new company.

Haas does not believe the 'new' Force India should be allowed to immediately qualify for 'Column 1' payments, which teams need to finish in the top 10 in two of three seasons to be eligible for.

There have been strong hints from Force India team principal Otmar Szafnauer at recent races that this dispute would be settled in Force India's favour.