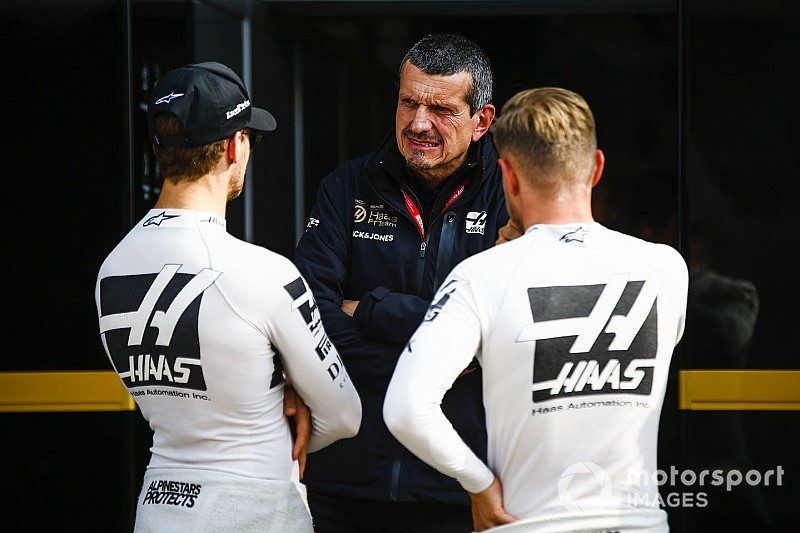 Haas Formula 1 boss Gunther Steiner says he must come up with a “solution” to his clashing drivers because team instructions are not getting through to them.

Romain Grosjean and Kevin Magnussen hit each other on the opening lap of the British Grand Prix, an incident that caused both to eventually retire and ruined Haas’s chances of gathering data for a crucial car experiment.

They clashed earlier this season in the Spanish Grand Prix, and collided in Britain last year as well.

Steiner said after the race did not “know the solution” because he needed to sleep on it.

“I need to wind down and come up with the solution,” he said. “I normally come up with solutions how to go forward, that’s my job, and whatever they are I will push them through because we are a team and everybody needs to work for the team and not for himself here.

“I want everybody to be steering in the same direction.

“When I saw it on TV I couldn’t almost believe it. There are two cars running into each other and it is our two.”

Steiner blasted his drivers' conduct as unacceptable after the race, and said that blame did not matter because the team’s instruction has been that even if one driver in the right “you give up and we sort it out later on in the race”.

He refused to listen to his drivers’ points of view during a post-race reprimand because he said he did not need to hear that explanation.

Steiner indicated he might “want to hear it” later in the week, but also wanted to work out why Grosjean and Magnussen are failing to adhere to instructions.

“It seems to not get through, but I don’t know what is not getting through,” said Steiner. “I need to think what we do about it with a clear head and make a decision how we sort this out because it isn’t acceptable.

“I can do a lot things. I don’t have to list them all to you, but we need to make a decision how we avoid it.”