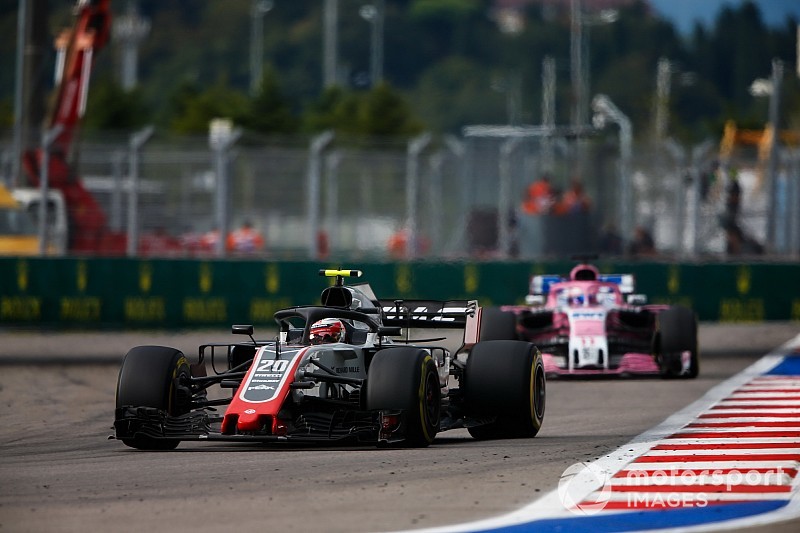 The Haas F1 team has submitted a notice of its intent to appeal the decision of the FIA Stewards after its unsuccessful protest against Force India.

The stewards dismissed the protest and asserted that Force India's entry is legal and that the current Racing Point team can race a car designed by the previous Sahara incarnation, whose entry was withdrawn before the Belgian GP.

An intent to appeal gives Haas 96 hours to make a final decision on whether it will go ahead with a full appeal.

Team principal Gunther Steiner stressed that buying some time was an obvious decision to take given the complicated legal nature of the decision, and the fact that it was issued on a busy race weekend just before a practice session.

"I didn't really have time to read it through, it's a big document they sent back explaining why," Steiner told Sky F1.

"In the end they have decided. We filed an intent of appeal, which doesn't mean a lot, it's just you buy yourself time so you can actually read what's written in there, and to find out whether it makes sense to appeal or not.

"I will know a bit more later, at the beginning of the week, when we have got time to speak with our legal advisors to see what we're going to do next.

"I wouldn't jump to a conclusion now. That needs to be dealt with after the race weekend. Now I want to try to get the best out of the last race of the year and have a good result, and then on Monday/Tuesday, we think further what we do next."

While Haas has ostensibly lost today, the decision provides an important legal clarification from the FIA to the effect that Racing Point Force India is a new team.

That could prove valuable as Haas continues its discussions with the F1 organisation over the way Racing Point has been granted the commercial rights earned by its predecessor, which is at the heart of its complaint.

Usually new teams have to wait two years before they gain access to full prize money.

"In the end it's all about money. We don't want more of the money, we just want that it is equal to everybody. We had to do two years, and in our opinion this is a new team, and we asked for this to be clarified."

Steiner downplayed suggestions that the team is planning to take action in the courts: "I don't know any of this yet. As I said that we will decide in the next weeks."