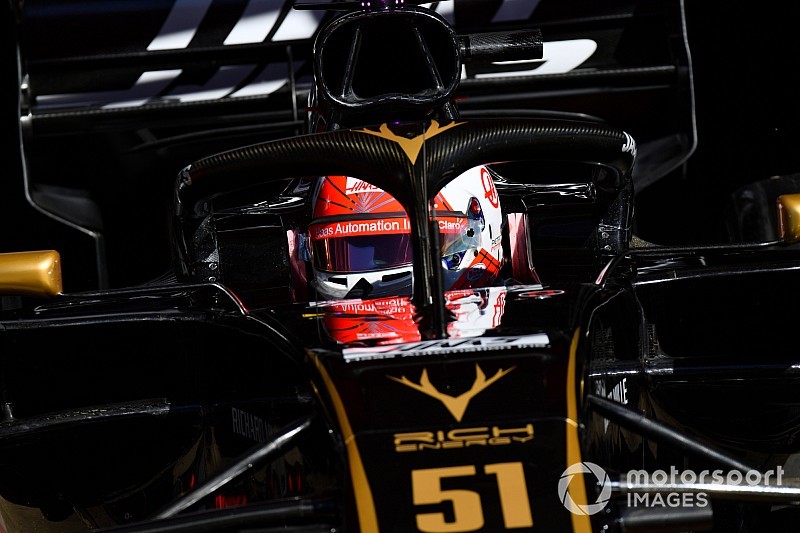 Haas has no plans to change its livery or the use of title sponsor Rich Energy's stag logo, despite the energy drinks company having lost a court case against Whyte Bikes earlier this week.

Whyte Bikes successfully won its legal action against Rich Energy, having lodged a copyright infringement claim over the use of an almost identical stag logo that the bikes company has established.

The case has opened the door for Whyte to lodge an injunction against Rich Energy for it to cease its use of the logo, as well as potential damages or a share of profits.

The matter is set to return to court next month, although in the meantime Haas says it has not been told it needs to change or remove the Rich Energy logo, which appears on its car and the drivers' helmet.

Asked by Motorsport.com about the impact of the case, Haas team boss Gunther Steiner said: "We were told [that] when we need to change something they will tell us.

"I am not going to get involved in their issues because they don't need me to sort that one out. For here [Monaco], we were told to keep the logo like it is and if there are any other instructions coming we are ready for it."

Although the court ruling was especially critical of Rich Energy CEO William Storey, Steiner said he was not too concerned about his team's image being damaged by the affair.

"I prefer not to judge people on what they say and what they do," he explained. "As you all know, I am very liberal on that stuff, I am not trying to say to people you did wrong or right, that is not my position in life.

"The judge had an opinion and they [Rich Energy] as far as I understand, and it is not coming from me, they will appeal the verdict. I think we have to wait until everything is done and then come to a conclusion.

"I think if the judge judges William like this, what can I do about this? He hasn't done anything bad to me. That is my opinion of it.

"He has done what he has said he is going to do. Is it bad for us? I don't really think so because the brand Rich Energy is bigger than William Storey in my opinion, so I wait until it is all over."

"I think it is easy way for Whyte Bikes to get a little bit of publicity putting an F1 car on without paying the money for it, so fair play to them," he said.

"They can get a lot of publicity out of it, but we are not actively dragged into it because we didn't do anything wrong. Our car is there but it doesn't say that Haas did anything wrong, so I cannot even complain about that. They didn't accuse us of doing anything wrong. They just said the logo is on an F1 car."

Giovinazzi admits confidence "going up and down"