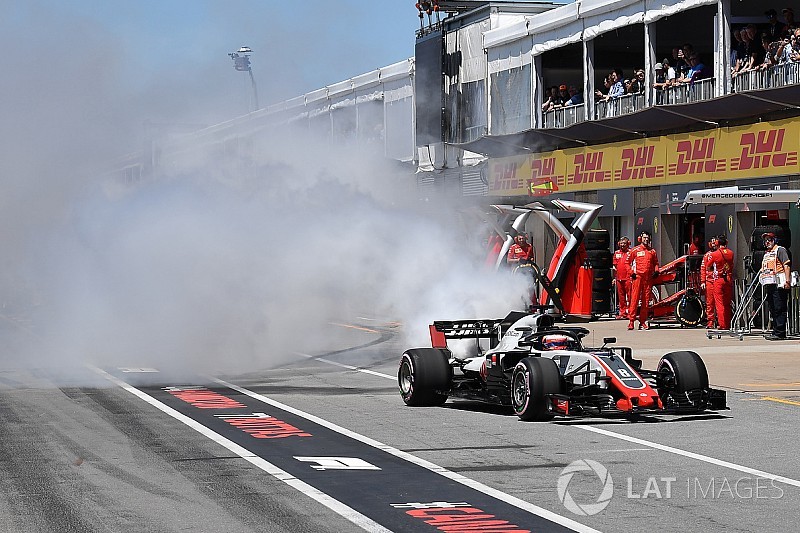 Haas boss Gunther Steiner thinks his team is in need of a change of fortune, after revealing that even rival outfits cannot believe how unlucky it has been.

Despite its Ferrari-powered car showing a great deal of promise, Haas is only eighth in the constructors' championship after an incident-packed campaign.

Points have been lost through a mixture of errors, like the pitstop problems in Australia, or bizarre circumstance like Grosjean hitting a groundhog in Canada practice and suffering an engine problem leaving the pits in qualifying.

Steiner is clear that his team cannot rely only on luck changing for its results to improve, but he thinks that things going his outfit's way would not be unwelcome.

"You never stop and say 'we need a break' and wait until you get lucky," explained Steiner after the Canadian Grand Prix. "We always try to do our best and come up with our best we can do.

"We showed in Canada where Kevin was struggling on Friday but still managed to quality 11th. And what happened with Romain in the end, we have not a lot of influence on that.

"We don't want to find excuses with that. It is one of the circumstances. In FP3 you have an issue like this, what can you do? We are very honest with ourselves."

When asked if he felt Haas deserved its luck to change, he said: "I wouldn't say deserve it because that is a little bit presumptuous. But we wish [for it], because other teams have come to me to say, 'what have you done to get it all?'

"For me, the weirdest thing is the groundhog running into us. There are 20 cars out there, a groundhog on their own, and we are going to hit it! And on the nose, not on the wing!

"If you try to do that, you can try for a 1000 years and it will never happen. It is one of these freak things. We don't deserve it – but we need to work hard and it will come to us. [You have to] hope that lady luck comes to you."

Although Haas has failed to score points in the last two races, Steiner says there is no concern about the overall performance of its car.

"What gets you over the disappointment is that four weeks ago in Barcelona we were the best of the rest by a good margin," he said.

"We haven't lost that. Is it circumstances? You always try to analyse this and to try to get better for the next event."

The Paul Ricard trick that nearly caused an F1 shock