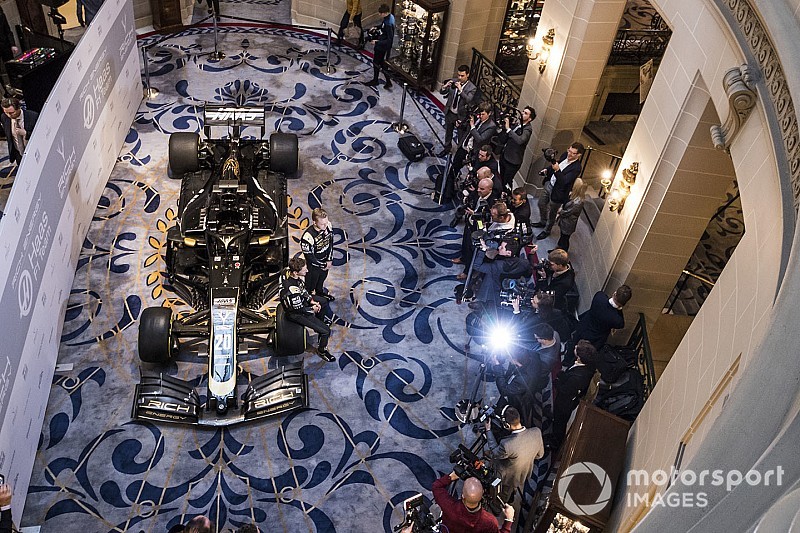 Haas's new Formula 1 title sponsor picked the American team over the likes of McLaren and Williams because "by every metric they were vastly superior".

British energy drinks company Rich Energy agreed a title deal with Haas late last year and this week the team unveiled its 2019 F1 car with a JPS Lotus-inspired black-and-gold livery to echo the colour scheme of its new backer's product.

Rich Energy was linked with both sponsoring and buying the Force India team last summer before turning its attentions to Haas, but it was also known to have had conversations with title-winning teams McLaren and Williams.

Asked why it picked Haas, which is preparing for only its fourth year in F1 but finished fifth in the constructors' championship last season, Rich Energy CEO William Storey said: "By every metric they were vastly superior.

"They had the best business model in the sport, they were uniquely positioned to exploit regulation changes and I think they are run in a very, very unpretentious fashion.

"I think they are proper racers, Gene Haas is a wonderful businessman who is approaching motor racing in the right way, Gunther Steiner is a brilliant team principal and they have got two drivers with personality."

Haas entered F1 in 2016 through partnerships with Ferrari, which involves the use of as many car parts as allowed by the FIA regulations, and Italian constructor Dallara, which produces Haas's own components.

The team scored points on its debut and last year challenged the works Renault team for fourth in the championship.

Storey told Motorsport.com: "We were reviewing options of various deals, reviewing teams, and we felt [impressed] in terms of their management, their ethos, their business model, how efficient they are, how professional they are at focusing on the important things.

"A lot of big teams, in my opinion, get waylaid by peripheral stuff. I don't think it's any secret we were speaking to other teams, all of whom put in very, very good proposals.

"But we just felt that when we analysed it in the cold light of day that Haas was head and shoulders above the rest in terms of a partnership for us."

Storey has slammed critics of Rich Energy and its product as like those who discredit the moon landing in 1969, or claim Elvis Presley is still alive.

He has named West Ham United Football Club co-owner David Sullivan as one of seven shareholders, indicating there is a significant amount of money behind the company.

"We have not got where we have got by following the crowd," said Storey. "We are a bit contrarian by nature and when others are fearful, be greedy.

"We intend to be in F1 long, long-term, and we believe that Haas are absolutely a dream partner for us.

"It is very 'David taking on the Goliaths' in F1 and we are doing the same in the drinks business."